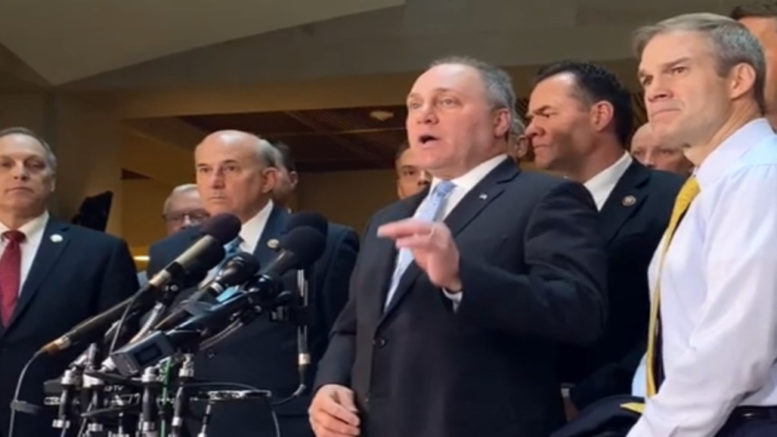 “When we showed up today to find out what is exactly going on, [Schiff] got out of the room and left with the witness. It was disgraceful, this has been a disgraceful process. This is a ‘soviet-style’ process. This should not be allowed in the United States of America!” Rep. Scalise declared.

“We’re not gonna be bullied! We’re not gonna not bow down to his threats,” Scalise expressed. “We’re gonna represent the voices of the millions of Americans that our districts represent. The vast majority members of Congress, by the way, who are not allowed to be in that room, ought to be in. Everybody ought to be able to see what’s going on in this inquiry, including members of Congress and the press, so our constituents can see what’s going on.” (Continued Below)

Rep. Matt Gaetz who led the fight and demanded transparency, said Wednesday morning, “I’m gathered here with dozens of my colleagues underground, in the basement of the Capitol, because behind those doors they intend to overturn the results of an American Presidential election. We want to know what’s going on!”

“It’s only reasonable that we would have questions because so far, Adam Schiff’s impeachment inquiry has been marked by secret interviews, selective leaks, weird theatrical performances of transcripts that never happened, and lies about contacts with the whistleblower,” he added.

Rep. Mark Meadows (R-NC) took to Twitter to say that Democrats’ efforts will fail: “Washington Democrats tried to take down @realDonaldTrump using a Russian collusion conspiracy theory. It didn’t work. This Ukraine ‘quid pro quo’ fairy tale is their second run at it, since the first effort failed. This one will fail too,” he wrote. (Video Below)

This Ukraine 'quid pro quo' fairy tale is their second run at it, since the first effort failed.

This one will fail too.