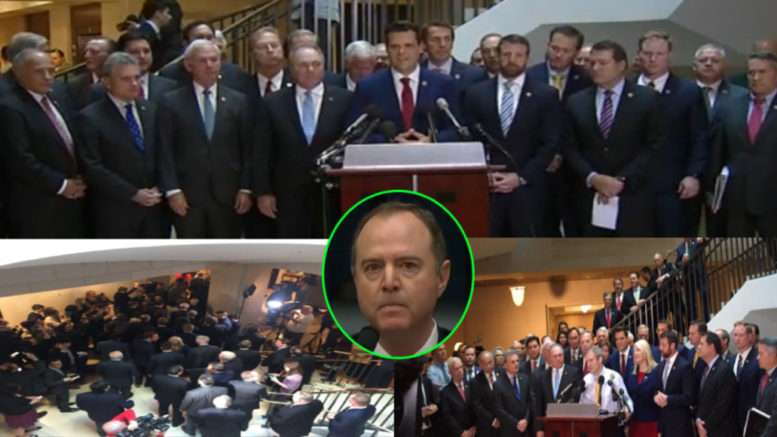 Afterward, they stormed the closed-door hearing in the SCIF, which is being led by House Intel Chairman, Adam Schiff (D-CA), to protest Democrats’ secret impeachment inquiry process on behalf of the American people.

“I’m gathered here with dozens of my colleagues underground, in the basement of the Capitol, because behind those doors they intend to overturn the results of an American Presidential election. We want to know what’s going on!” Rep. Matt Gaetz declared. “It’s only reasonable that we would have questions because so far, Adam Schiff’s impeachment inquiry has been marked by secret interviews, selective leaks, weird theatrical performances of transcripts that never happened, and lies about contacts with the whistleblower.”

Minority Whip Steve Scalise (R-LA) asked, “What is Adam Schiff trying to hide? I think that’s the question so many people have, so many of my colleagues have, so many people in the press should have– is through those hidden closed doors. Adam Schiff is trying to impeach a President of the United States behind closed doors, literally trying to overturn the results of the 2016 election, a year before Americans get to go to the polls to decide who’s going to be the President. And frankly, it should be the people of this country who decide who’s gonna be the President, not Nancy Pelosi and not Adam Schiff in secret, behind closed doors.”

Scalise noted that “voting members of Congress are being denied access” from being able to see what is happening behind Schiff’s closed doors to impeach the President. “[It is] a one-sided set of rules. They call the witnesses, they don’t let anyone else call the witnesses. They don’t even let the President’s legal counsel question people who are making baseless allegations. Maybe in the Soviet Union, this kind of thing is commonplace. This shouldn’t be happening in the United States of America where they’re trying to impeach the president in secret, behind closed doors. The American people deserve better. We will demand better for the American people,” he added.

Zeldin continued, “What is happening behind closed doors is ‘unclassified’. There’s no reason why the American public shouldn’t be able to watch this in real-time live. This is a process lacking legitimacy, credibility, and fairness, and we have a huge problem with that.”

“One fun fact from yesterday,” Zeldin announced. “I saw that the opening statement leaked. This is what happens, the Democrats strategy, they like to cherrypick leaks. Turn to page 12. The only reference to Joe Biden, other than one reference to the July 25th transcript. In that one reference, it’s not first hand from Ambassador Taylor, it’s not second hand, it’s not third hand. Ya’ll [are] making a big deal of Ambassador Taylor telling him that Tim Morrison told him that Sondland told Morrison that the President told Sondland that the President told Zelenksy… give me a break!”

After the press conference, Republicans barged into the secure hearing room in the Capitol basement where Laura Cooper, the deputy assistant secretary of defense for Russia, Ukraine, and Eurasia, was set to provide private testimony.

Several lawmakers said that, in response to the Republican protest, House Intelligence Committee Chairman (D-Calif.) had left the room with Cooper, postponing the interview indefinitely.

Rep. Roger Marshall (R-Kan.) said Schiff said “nothing” when the members sat down before he left with Cooper.

Rep. Michael Waltz (R-Fla.) said Schiff left the room and said the hearing has been postponed. He added that Schiff is “threatening” GOP members with ethics violations.

Rep. Mike Waltz (R-Fla.) said Schiff left the room and said the hearing has been postponed. He added that Schiff is “threatening” GOP members with ethics violations. (Video Below)


Republicans official remarks and storming into the SCIF:

I joined @RepMattGaetz and dozens of other @HouseGOP colleagues for a press conference to demand @RepAdamSchiff open the “impeachment inquiry” hearings and be transparent. We then went to the SCIF and the @HouseDemocrats ended the hearing and left the room. My reaction ⬇️⬇️⬇️ pic.twitter.com/1WpF6CzF24

Only one knows who the “whistleblower” is and who their sources are: @RepAdamSchiff.