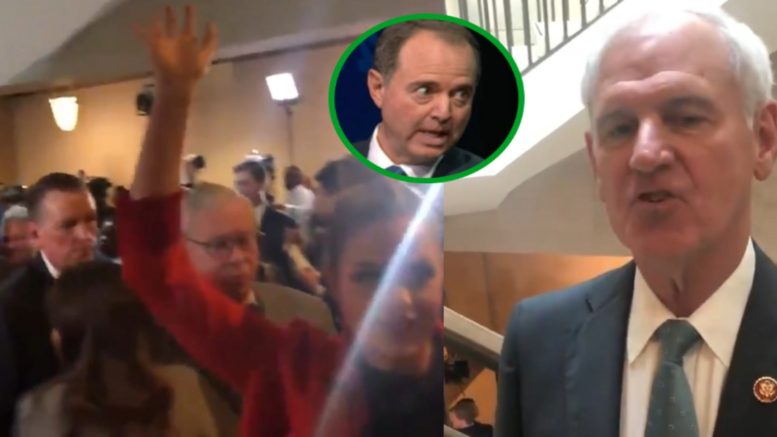 On Wednesday, Rep. Matt Gaetz (R-FL) led the fight with Republican colleagues by holding a press conference and demanding transparency into the Democrat-led secret impeachment probe against President Donald Trump.

Afterward, dozens of Republicans “stormed” the closed-door hearing in the SCIF, which is being led by House Intel Chairman, Adam Schiff (D-CA), to protest Democrats’ secret impeachment inquiry process.

Laura Cooper, the deputy assistant secretary of Defense for Russia, Ukraine and Eurasia, was set to provide private testimony when Republicans barged in, but she and Schiff reportedly left the room until the protest ended, roughly five hours later.

After the protest ended, Congressman Bradley Byrne, who is on the Armed Services Committee, issued scathing remarks outside of the SCIF, where he called the secret hearings “a sham.”

“The witness they had in that room was a deputy assistant secretary of Defense,” Byrne said. “I’m on the Armed Services Committee.”

“They would not let the witness go forward with us on the room even though we are on the committee of jurisdiction,” he continued. Video Below

Related Article: After Storming The SCIF, Rep Gohmert Gives An Update From Inside: ‘We Plan On Staying Here Until We Negotiate A Resolution’

“This is a sham,” Rep. Byrne declared. “And they just showed the sham that it is by the way they conducted themselves just now.”

“They’re also threatening to file ethics complaints against those of us in House that wanna be in the room, and that shows more than anything else, they’ll stop at nothing. We’re fighting as hard as we can. We need more people to fight with us,” he concluded. Video Below

Adam Schiff just SHUT DOWN his secret underground impeachment hearing after I led a group of Republicans into the room. Now he's threatening me with an Ethics complaint! I'm on the Armed Services Cmte but being blocked from the Dept. Asst. SecDef's testimony. This is a SHAM! pic.twitter.com/6qUMerxENC

In ending, here is video of the Republican leaders marching into the SCIF

While they definitely intended to disrupt proceedings and raised their voices (I was there–I shot this video) 'stormed the room' may be a bit too dramatic a description as you can see.