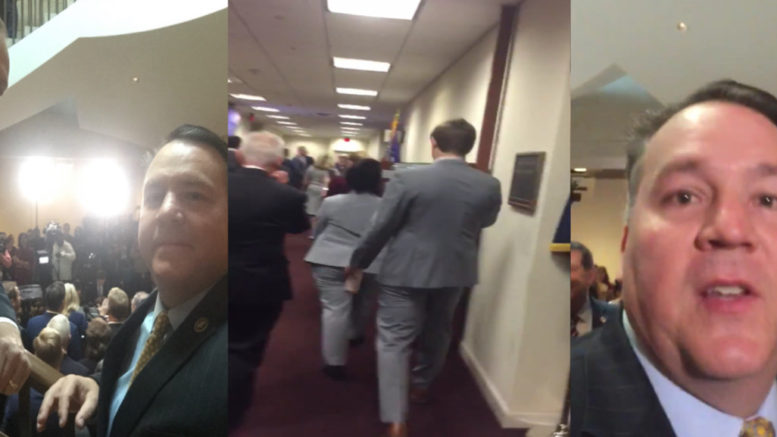 Afterward, they stormed the closed-door hearing in the SCIF, which is being led by House Intel Chairman, Adam Schiff (D-CA), to protest Democrats’ secret impeachment inquiry process on behalf of the American people.

Once inside the SCIF, Mooney released an “audio report” from inside the room where he was determined to “expose Adam Schiff’s secret so-called impeachment inquiry”.

The West Virginia Congressman said in his audio message: “I’m calling you live from the SCIF. It is precisely 1:22 pm. We came in this morning to the press conference around 10 am. We’ve been sitting here waiting for the hearing to start.”

“The moment we walked in the room, Chairman Adam Schiff saw us, took the witness and walked out of the room. They refused to have a hearing in a transparent way for the people of West Virginia’s second congressional district can be aware of what is going on,” Rep. Mooney continued. “I represent over 600,000 people in West Virginia, who are not given a right to know what’s even being said in these hearings, as they brazenly attempt to impeach the President of the United States!” (Continued Below)

Rep. Mooney expressed he’s “Proud that over 30 members of Congress and [House Louisianna Republican] Whip Steve Scalise walked into [the SCIF] and demanded transparency and justice for our President.”

(Related: After Storming The SCIF, Rep Gohmert Gives An Update From Inside: ‘We Plan On Staying Here Until We Negotiate A Resolution’)

He also noted that they were there for hours waiting for the hearing to start while all of the Democrat members left. “I’m calling you from the SCIF on a secure phone right now; we had to give up our cell phones as we were coming in because you couldn’t have them there,” Mooney said. “I’m proud to be standing for our President.” (Videos Below)

Here is the video of me before entering the SCIF hearing room to expose Adam Schiff and the Democrats secret impeachment hearing to demand transparency for West Virginians and the American people. pic.twitter.com/DGEJZHehbz

BREAKING–> My report from inside the SCIF hearing room where we are exposing Adam Schiff's secret so-called impeachment inquiry. pic.twitter.com/fPcPJ94R9y

Standing with my House Republican Colleagues this morning at a press conference to expose this sham impeachment process. @RepAndyBiggsAZ @RepMattGaetz pic.twitter.com/oX63Cf6xor

(Related: After The SCIF Showdown, Scalise Faces The Press & Slams Schiff Over His ‘Soviet-Style Process’: ‘This Should Not Be Allowed In The United States’)