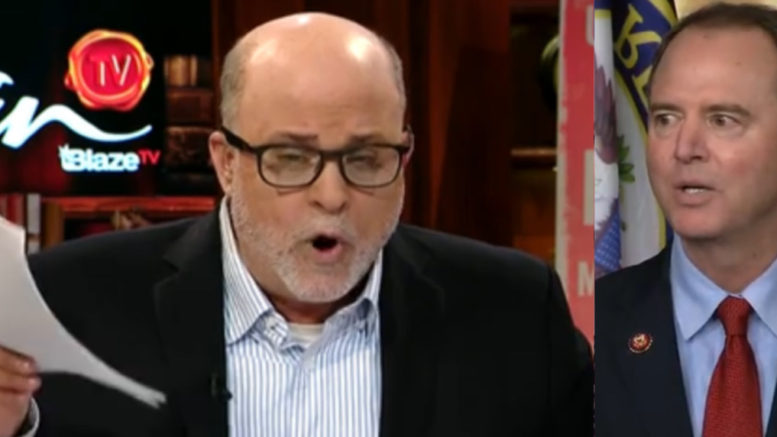 Mark Levin, “the great one” spoke with host Sean Hannity on Fox News Thursday where he blasted House Democrats over their “tyrannical” impeachment process.

Levin who read passages from the Clinton impeachment inquiry showcasing why he believes that Democrats are treating President Trump unfairly, accusing Democrats trying to push an impeachment trial in the 2020 general election, Fox News reported.

“What we have is a rouge Democrat party in the House of Representatives that’s using the institution of the House and the impeachment clause to interfere with the 2020 election. They’re interfering in the 2020 election more than the Russians did, more than the Ukrainians did, even though that was bad enough. And they’re using our tax dollars to do it,” Mark Levin explained.

“So, Nixon and Clinton got treated fairly,” Levin declared. “Trump gets treated worse than a terrorist or mass murderer.”

“I hear some of these legal analysts out there going on and on about that’s the next stage. No, I’m afraid not. You didn’t have an official vote on an impeachment hearing,” Levin noted. “This entire thing is the Democrat Party in the House seizing control of the instrumentalities of the House bastardizing the impeachment clause, in order to drive a trial into the general election.” (Continued Below)

Levin also pointed out an article from Politico that was written in January 2017 entitled: “Ukrainian efforts to sabotage Trump backfire”.

Ukrainian government officials tried to help Hillary Clinton and undermine Trump by publicly questioning his fitness for office. They also disseminated documents implicating a top Trump aide in corruption and suggested they were investigating the matter, only to back away after the election. And they helped Clinton’s allies research damaging information on Trump and his advisers, a Politico investigation found, Politico reported in part.

“It goes into excruciating detail how the Clinton campaign, how the DNC, the Obama administration in 2016 worked with the corrupt Ukrainian government to help Hillary and undermine the Trump campaign. This is why the President wants to know what the hell happened in 2016!” Levin expressed. (Continued Below)

Levin also dismissed the testimony earlier in the week of diplomat Bill Taylor. “We have testimony from William Taylor. Who the hell is William Taylor,” Levin asked. “All of a sudden he’s the great William Taylor because Adam Schiff has anointed him as such. He’s a long-time State Department bureaucrat, he’s the acting Ambassador to the Ukraine, and he talks about among other things, that this is highly irregular conduct,” he said.

Levin further blasted the media for their hypocrisy and their unwillingness to cover what he described as the House Intelligence Committee Chairman Adam Schiff’s (D-CA) “secret” impeachment inquiry.

“Where are these press organizations today when it comes to Adam Schiff keeping the press out of these secret testimony? These secret hearings? They don’t much give a damn anymore, do they?” Levin asked.

(Related: Reporter Suggests Sen. Graham Is Interfering In The Impeachment Process, Graham Levels Her: ‘If We Were Doing This, You’d Be Beating The Sh*t Out Of Us’)