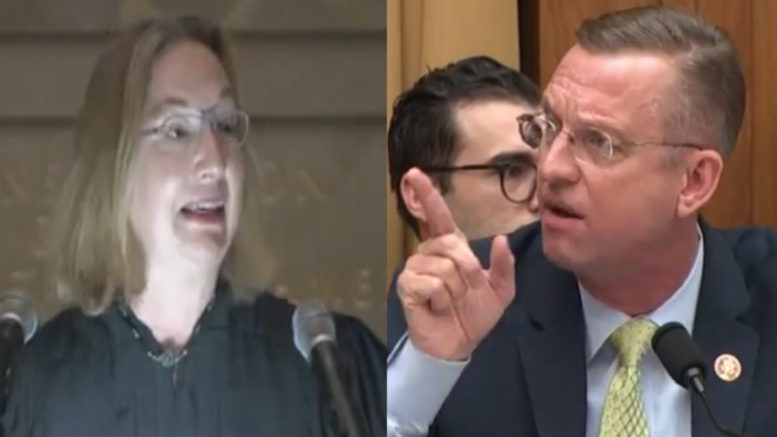 Howell also informed the Justice Department they have until Oct. 30 to turn over the redacted portions of the grand jury material that the committee is trying to obtain. However, the Trump administration will likely appeal the judges ruling — including a request for a stay — to the US Court of Appeals for the DC Circuit.

Democrats had requested that the Justice Department provide the material, which was redacted from Mueller’s report, as part of their ongoing “impeachment inquiry” against President Trump.

In a 75-page ruling accompanying the order, Howell slashed through many of the administration’s arguments for withholding materials from Congress. While the Justice Department said it couldn’t provide grand jury material under existing law, “DOJ is wrong,” she wrote. And while the White House and its Republican allies argued impeachment is illegitimate without a formal vote, she later added, “A House resolution has never, in fact, been required,” Fox News reported.

However, in August, Howell shot down an attempt by House Judiciary Committee Democrats to link their subpoena for former White House counsel Don McGahn to a separate request for secret grand jury information from the Russia investigation after the Justice Department accused them of trying to “game the system”.

Republicans have demanded Democrats hold a formal vote on the House floor to launch impeachment proceedings to legitimize the inquiry, clarify its scope and provide them with additional rights in the minority. Pat. A Cipollone, counsel to the President, sent a scathing letter to House Democrats on Tuesday, in response to what he called their “numerous, legally unsupported demands” for a “partisan and unconstitutional impeachment inquiry.” (Continued Below)

“While close scrutiny of the historical record undercuts that justification for the ‘House resolution’ test proposed by Representative [Doug] Collins, the more significant flaw with this proposal is as follows: while this test may address political legitimacy concerns, which are best resolved in the political arena, no governing law requires this test-not the Constitution, not House Rules, and not Rule 6(e), and so imposing this test would be an impermissible intrusion on the House’s constitutional authority both to “determine the rules of its proceedings,” Howell wrote.

Rep. Collins (R-GA), the ranking member on the House Judiciary Committee, previously argued that the House has not delegated the Judiciary Committee the power to start an impeachment inquiry, but Judge Howell wrote in response to Collins: “These contentions are, at worst, red herrings and, at best, incorrect.” (Continued Below)

In response to Judge Howell’s decision, Rep. Collins took to Twitter Saturday where he slammed the Judge in a press statement, for ruling on the release of the grand jury material to Democrats.

“This ruling is dangerous for every American. The grand jury secrecy rules exist to protect innocent people against public disclosure of information and hearsay that could unfairly harm them.”

“When we’re considering removing a democratically elected president, our best yardstick is historical experience, and this decision ignores that experience while failing to answer the crucial question of when this supposed ‘impeachment inquiry’ actually began.”

“I look forward to an expeditious appeal.” Rep. Collins stated. (Continued Below)


Rep. Collins also tweeted, “Judge Howell’s ruling is dangerous.  If we’re considering removing a democratically elected president, our best yardstick is historical experience. This decision ignores that and fails to answer the question of when this ‘impeachment inquiry’ even began.”

If we’re considering removing a democratically elected president, our best yardstick is historical experience. This decision ignores that and fails to answer the question of when this "impeachment inquiry" even began.https://t.co/c5eKEsNi6c