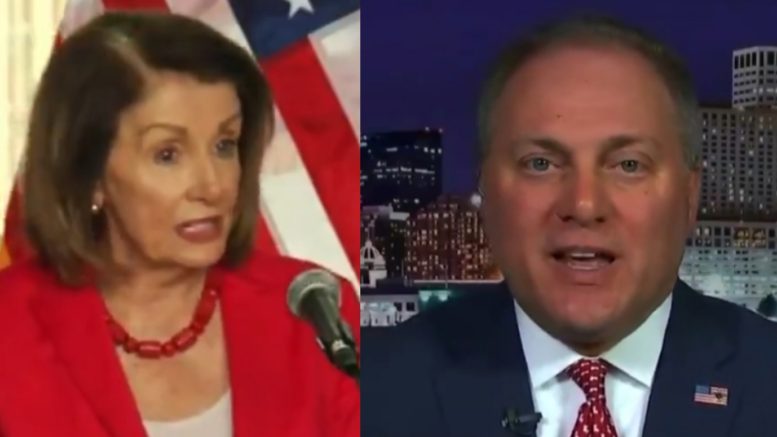 While appearing with Jason Chaffetz on Fox News, Congressman Steve Scalise shined light on House Speaker Nancy Pelosi’s “failed leadership” as he thinks House Democrats have focused nearly all of their time in 2019 trying to impeach President Trump and have nothing to show for.

Scalise slammed Pelosi for not having a floor vote on the House floor on the impeachment inquiry, and explained why he thinks she is “scared to death” of doing so.

“She’s scared to death of having a full vote on the House floor of even starting an impeachment inquiry, which by the way, is how every other impeachment inquiry — the other three — into previous Presidents have been done in the history of our country,” Scalise said.

“And, so she’s trying to shield the vulnerable members because they can’t go home right now and talk about what they’ve done,” he added. “They’re now the party of impeachment and that’s all they have to show.”

He went on to say that it’s a “failure of leadership” and Democrats have shown that they’d much rather “badger the President” than get anything done.

“They’ve investigated him for over two years, with the Mueller investigation — they thought that was gonna be their ticket. And it was nothing,” Scalise concluded. Video Below

The Do Nothing Democrats are the party of impeachment. All they do is harass @realDonaldTrump.

Their record so far: More subpoenas than bills signed into law. Embarrassing.

This Democrat majority is a waste of the American people's time. pic.twitter.com/Thi2lmLcvq