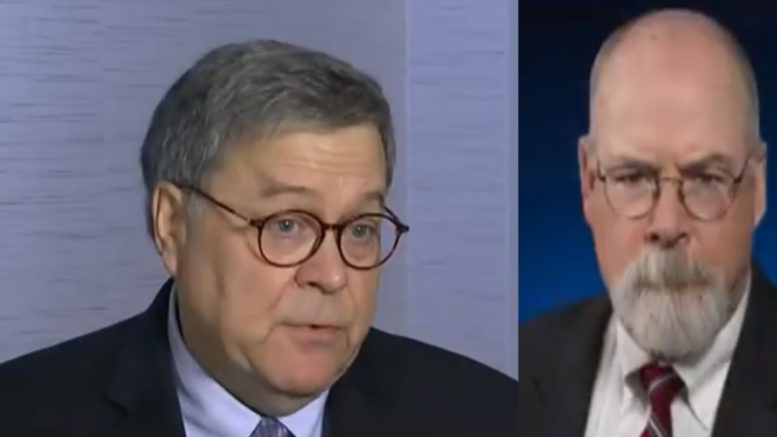 Attorney General William Barr attended the International Association of Chiefs of Police in Chicago, Illinois on Monday and met with members of law enforcement. Before meeting with them, however, Fox New’s Justice Department producer, Jake Gibson, interviewed with Barr and asked him about Attorney John Durham’s investigation.

Durham’s ongoing probe into potential FBI and Justice Department misconduct in the run-up to the 2016 election through the spring of 2017 has transitioned into a full-fledged criminal investigation, and he now has the ability to impanel a grand jury, issue subpoenas, and file criminal charges.

“Durham, who is the U.S. Attorney for Connecticut is in charge of the investigation, and I understand he is making great progress,” Attorney General William Barr said.

“As you know, he’s a 35 year veteran of the department, [a] great reputation for nonpartisanship. He was selected by two Democratic Attorney Generals to do sensitive investigations for them. He’s a by the book kind of guy. He’s thorough and fair and I’m confident he’s gonna get to the bottom of things,” Barr explained.

In May, Attorney General Barr appointed U.S. Attorney John Durham to investigate the origins of the Russia investigation to determine if the FBI’s “spying” on the Trump campaign in 2016 was adequately predicated.

The inquiry will focus on whether the government’s methods to collect intelligence relating to the Trump campaign were lawful and appropriate. Durham has previously investigated law enforcement corruption, the destruction of CIA videotapes and the Boston FBI office’s relationship with mobsters, according to AP. (Continued Below)

Before the Senate Appropriations subcommittee in April, the Attorney General said that he believes “spying did occur” on the Trump campaign in 2016 and vowed to review the conduct of the FBI’s original Russia probe. “I am reviewing the conduct of the investigation and trying to get my arms around all the aspects of the counterintelligence investigation that was conducted during the summer of 2016,” Barr said.

“We’ll let the chips fall where they may. I think they all know John Durham’s reputation, and we’ll just see how it turns out,” Barr said on Monday.

“I do want to say that one of the reasons Mr. Durham is able to make the kind of progress he’s making, is because Director Wray and his team at the FBI have been outstanding in the support and responsiveness,” the Attorney General added. (Video Below)

Related: James Clapper: ‘It’s Disconcerting To Be Investigated For Having Done Our Duty & What We Were Told To Do By The President’