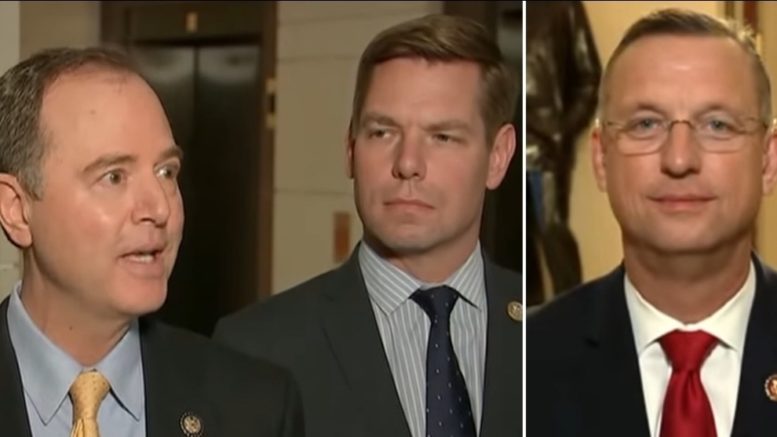 Ranking Member of the House Judiciary Committee, Rep. Doug Collins (R-GA), spoke with host Sandra Smith on Fox News’ “America’s Newsroom” Tuesday, where he pushed back at House Democrats’ impeachment vote, describing it as nothing but a “sham”.

House Speaker Nancy Pelosi (D-CA) said Monday the House of Representatives will vote Thursday on a resolution to formalize the impeachment inquiry against President Donald Trump. It is not an actual article of impeachment, but rather a resolution that sets process ground rules.

“Here we are again in Washington, D.C. where we should be doing the people’s business and now, we’ve had another change of heart by Speaker Pelosi, who now decided everything they’ve been doing for the last three weeks was wrong.” Rep. Collins said. “We’ve been telling them it [was] wrong. We gave them plenty of notice that [it] was wrong and not fair to the American people or fair to the President.”

Rep. Collins pointed out that Republicans have not even seen the text of the resolution yet, because they “had to write it all out last night,” adding, “That shows you how desperate they are,” he said.

“So, we’ll see what happens on Thursday. This is a sham; it’s simply to cover their problems, that they’ve had with this investigation all along– putting Adam Schiff in a closed room, leaking out stuff that he wants to leak out and making it appear to be something it’s not. We’ll see the Republicans vote against this because again, you can’t ‘fix’ the craziness that they’ve done over the past 3/4 weeks to slam this president, and do what they have been doing, and now try to make it better,” the Georgia Congressman explained.

Pelosi said in a letter sent to Democratic House lawmakers on Monday, “We are taking this step to eliminate any doubt as to whether the Trump administration may withhold documents, prevent witness testimony, disregard duly authorized subpoenas, or continue obstructing the House of Representatives”. (Continued Below)

Sandra Smith said that Democrats, however, are making their impeachment case as “obstruction of Congress”, but Collins countered: “Okay, well… it’s Tuesday, so let’s pick a new reason to impeach the President because we’ve tried collusion, we’ve tried working with the Russians, [they’ve] accused him of being a Russian agent, now we’ve accused him of ‘quid pro quo’ when the Ukrainians didn’t even know about what was going on with any of the discussions about aid. And even Zelenksy said he never felt pressured.”

“Now we’re coming to… obstruction, and even Adam Schiff said something yesterday that was really amazing to me– that by somebody not showing up, we’ll assume that they’re hiding something that the President did wrong. Excuse me! I’m not sure what law school he went to, but that’s not the way the Judicial system works in America. Just because you don’t show up, because he had legitimate concerns about why he was even [having] to show up, and why he should show up… this just shows the hypocrisy of the Democratic party,” Rep. Collins expressed.

House Intelligence Committee Chairman, Adam Schiff (D-CA) suggested on Monday that the blocking of witnesses by the White House is “strengthening Democrats’ case for obstruction”. He claimed, “It’s hard to say what other senior officials will do. I’m sure they’ll get like instructions from the White House. And if they do, and they fail to appear, they will be building a very powerful case against the President for obstruction. (Video Below)

Asked if the White House blocking of the witnesses will backfire, Rep. Collins leveled Schiff: “No. There’s nothing you can do right now. Let’s make this very clear Sandra. There’s nothing this White House could do to make Adam Schiff happy or Nancy Pelosi happy, or their base that wants to impeach this President.”

“They don’t like him, they’ve said it on many occasions. The only way they can beat him next year is to try and impeach him. Let’s don’t even go to the facade that Adam Schiff is really concerned about what the White House is doing. He will spin anything he can to make it any way he wants to,” he added.

“He’s already been shown to be a liar, he’s already shown to leak information, … that he has no business running any kind of investigation, much less this one. So he makes it tough for the people to listen to this. Especially for those of us who are saying if you’re gonna do it, at least do it properly. They’ve blown that a long time ago,” the House Judiciary Ranking Member added.

(Related: Caught On Camera: Pelosi Says ”There Is No Impeachment Resolution” When Reporter Asks About It)