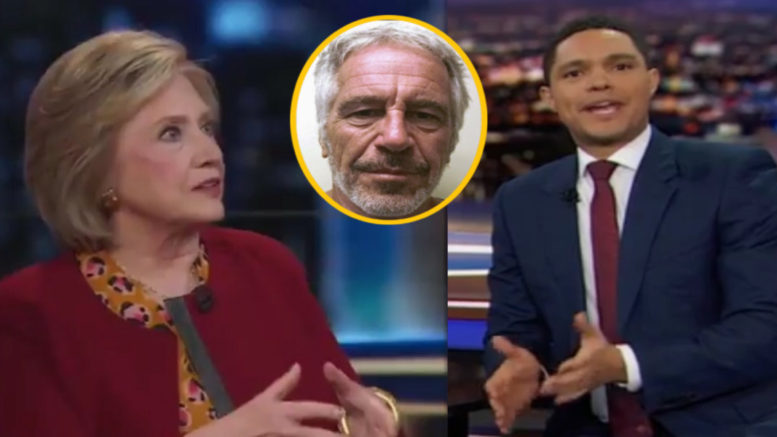 Thursday, during an interview on “The Daily Show”, host Trevor Noah asked twice failed candidate and former Secretary of State, Hillary Clinton, point-blank how she killed Jeffrey Epstein. Appearing alongside her, Chelsea Clinton also chimed in with a response.

The host’s question was seemingly aimed as a “conspiracy theory” insinuating that the Clintons were involved in the death of Epstein, to essentially coverup their connection to the former sex trafficker.

“I have to ask you a question that has been plaguing me for a while: How did you Kill Jeffrey Epstein?” the Daily Show host asked Hillary Clinton, to which resulted in laughter.

“Because you’re not power, but you have all the power. I really need to understand how you do what you do because you seem to be behind everything nefarious and yet, you do not use it to become president. What is the game plan?” Trevor Noah asked. “Honestly, what does it feel like being the boogeyman of the right?”

Hillary Clinton responded: “Well, it’s a constant surprise to me. Because the things they say, and now, of course, it’s on steroids with being online– are so ridiculous, beyond any imagination that I could have. And yet, they are so persistent in putting forth these crazy ideas and theories. Honestly, I don’t know what I ever did to get them so upset.”

Chelsea chimed in and said, “I also think because it is effective. I’ll never forget reading an article after the 2016 election, where the reporter interviewed someone who had been an undecided voter. And he said that my mom had won all 3 debates, she clearly had a greater command of the subject matter. And yet, he just kept reading that she had murdered more than 50 people. And he said nonchalantly, ‘I don’t think that she murdered 50, but what if she murdered 2?’ This is just a constant erosion of truth and sanity.” (Continued Below)

Epstein was found hanging in his prison cell at the high-security Metropolitan Correctional Center in Manhattan and was later pronounced dead from suicide.

On Wednesday, pathologist Dr. Michael Baden, however, interviewed with “Fox & Friends” and told the Fox News hosts that he was hired by Epstein’s family to investigate Epstein’s death.

“Those three fractures are extremely unusual in suicidal hangings and could occur much more commonly in homicidal strangulation,” Baden said during the interview, referring to the broken neck bones, including Epstein’s hyoid bone. “I’ve not seen in 50 years where that occurred in a suicidal hanging case.” (Video Below)

The ligature, or item used to tie something tightly, allegedly was made from a sheet that had been twisted and put around Epstein’s neck, Baden said. Evidence on the cloth material could help prove whether or not someone else was involved in Epstein’s death.

“Whoever it is would have their DNA all over the ligature,” Baden noted. “We don’t have those results yet,” he added, saying those results “should be reported quickly to give an idea and lessen the speculation. … There’s evidence here of homicide that should be investigated, to see if it is or isn’t homicide,” he said.