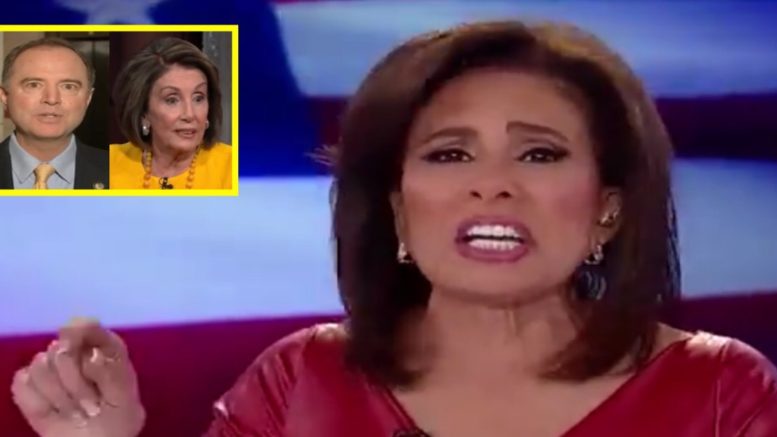 “History has shown us that real impeachment is nothing like the partisan divide we saw this week in Nancy Pelosi’s House vote to ‘formalize’ procedures for the impeachment inquiry,” Judge Jeanine began in her opening. “The vote was 232-196, strictly along party lines. 2 Democrats, however, defected and even voted with the Republicans.”

“It is so clear what is happening here: a vote to simply formalize the procedure is by far the least partisan vote, it’s benign. If there were a scintilla of evidence of an impeachable offense, that vote would’ve crossed party lines as it did with Nixon and Clinton,” she explained. “Prediction? Complete and total failure ultimately in the Senate.”

Judge Jeanine believes that the “Democrat players” are dishonest, disingenuous, and deceitful. She listed examples: “Nancy says, ‘I’ll only do this in a nonpartisan way’. She lied! The woman is more than willing to impeach in a ‘partisan’ way and as well, divide the country in her power grab from the rightful occupant of the Oval Office.”

Then she noted that “lying sack of Schiff” is so “dishonest” and his law license should be revoked. “He lies about the so-called whistleblower saying, ‘We never talked to him’, when they did! He purgers himself in Congress as he lies about what the President said on the Ukraine phone call. He lied when he told us he had evidence of Russia collusion. He was cunning as he created a narrative about Ukraine while the Deep State cultivated the so-called whistleblower, who reportedly, is an Obama holdover– who not confirmed by Fox News, has apparently worked with Joe Biden, John Brennan, and Susan Rice. Just like the Russia collusion delusion, these liars created yet another narrative, so they could impeach Donald Trump,” she said.

The Judge pointed out that historically, a whistleblower had to have first-hand knowledge. The Democrats, however, changed the rules. “Now hearsay can be the basis to take down a president. You don’t have to see it, witness it, or even hear it first hand. You can just mosey around and talk to the other malcontents in the west wing who don’t like Donald Trump and then call yourself a whistleblower,” Pirro explained. (Continued Below)

“Now either Schiff is stupid or his ego is so big that he doesn’t know that a president can only be impeached when a ‘high crime’ or ‘misdemeanor’ occurs. Like when a president has done something so outrageous and so beyond the norm that we as a nation say he no longer deserves to remain in the Oval– that he can no longer be our Commander in Chief. Bill Clinton engaging in sex acts with an intern in the Oval Office, while he’s president. That is about as disgusting and abuse of power that the ‘Me Too Movement’ has ever chosen to ignore!” she expressed. “Richard Nixon was part of a conspiracy that approved a burglary into the Democratic headquarters at Watergate. A crime in of itself.”

Pirro said that in both cases of Clinton and Nixon, there was nonpartisan subpoena power. The president’s attornies were present. There was a cross-examination. “And get this: Adam Schiff has a closed-door interview on the day Democrats voted to make the process more ‘transparent’. What a joke!” she declared. “This guy thinks he an Emporer. And they’re probably telling him his clothes are beautiful.”

Pirro said the Democrats have no rules and their “so-called” impeachment inquiry, puts the president in a “worse” place than any other president where impeachment was attempted. (Continued Below)

“Queen Nancy and Emporer Adam’s world, Donald Trump has fewer rights than an MS-13 gang member illegally crossing our southern border,” the Judge said. “This is outright lunacy! With the liars and the leakers and the leftists running the asylum– with radicals resisting not just the president, but the law, the Constitution, and the Americans who put this man in office. They take our laws and our Constitution and they use them to distort them for their own illegal purposes. And damnit! They’ve gotten away with it. Who the hell are these people, who flaunt the law and get away with it? And they even laugh about the fact that their deep state is accomplishing its goal.”

She expressed that she is sick and tired of the “nonsense, lies, hate, hypocrisy and lawlessness who hates the man, who everyday fights for this country”, adding, “I don’t want to hear that secret hearings are still going on. … that Schiff has the right to veto the president’s lawyer, to veto a Republican subpoena, to veto testimony– to close the doors. Who the hell does this guy think he is? Who’s blowing smoke up his Schiff?”

“Nancy Pelosi, for all her nonsense about the president ‘not being above the law’, stop the double-speak, Nancy! It’s you and your gang of criminals, who are above the law. And Bill Barr and John Durham better be prepared with indictments or face the wrath of America, that for too long, has felt that they are held to a different standard,” Pirro noted.

“In the end, this is only about a conversation that our President had with the President of Ukraine. And to be honest with you, it’s not any of your damn business what was said. We’re not entitled to know what Barack Obama was promising Putin through Medvedev after the election in that hot mic moment. And we’re not entitled to know the quid pro quo of what Barack Obama was when he gave 150 billion dollars to the Ayatollah. Or are we just supposed to assume he was playing Santa Claus with Iran?” Pirro asked. [Emphasized]. (Continued Below)

She explained that the phone call with Ukraine involved policy and noted that if one doesn’t like the president’s policy, then vote for someone else. “The guy on the other end of the phone says there was no pressure. The transcript makes it clear there was no pressure. The guy on the other end didn’t even know military funds were not available. So, how the hell can there be a quid pro quo?” she wondered.

Pirro concluded her opening by saying that she is tired of protecting the whistleblower. “Barack Obama fired the whistleblower in ‘Fast and Furious’. And for what it appears, this whistleblower is just another punk trying to get his leftist creds. He’s nothing more than white noise– totally irrelevant to the conversation, which in itself, is the best and only evidence,” she said.

“So all of you out there, get over it! This is a bunch of nonsense. The Democrats are tearing this country apart, yet again They are wusses and wimps and weasels and they don’t have the chutzpah to face Donald Trump in November. And I don’t blame them. Because he’ll blow those wusses, wimps, and weasels right out of the swampy water that they call home,” Pirro declared.

(Related: Rep. Jordan On Schiff’s Impeachment Efforts: “You Can Try To Put A Ribbon On The Sham Process, But That Doesn’t Make It Any Less Of A Sham”)