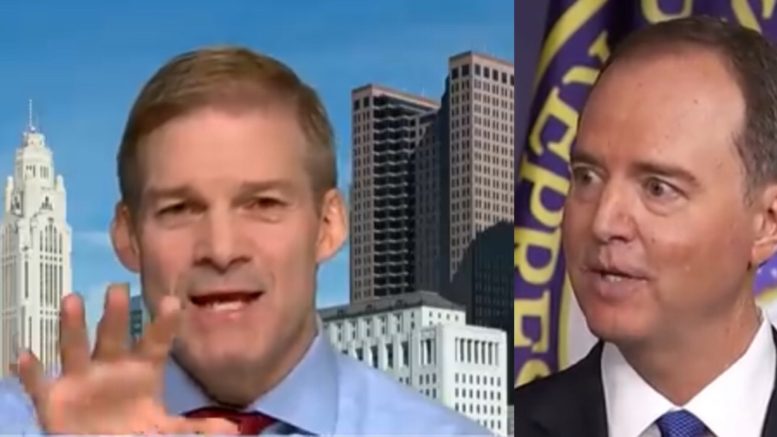 Ranking member of the House Oversight Committee, Jim Jordan (R-OH) spoke with host Maria Bartiromo on “Sunday Morning Futures” where he weighed in after Democrats voted to formalize impeachment proceedings.

The measure passed 232-196. No Republicans voted for the measure, but two Democrats broke with their party and voted against the resolution: Rep. Collin Peterson (D-MN) and Jeff Van Drew (D-NJ).

Rep. Jordan told Maria Bartiromo that he will still be able to participate in the hearings if House Intel Chairman Adam Schiff (D-CA) keeps conducting closed-door depositions, but noted when it moves to open hearings, it will only be the House Intelligence Committee, who is allowed to be involved in the process.

“Adam Schiff gets 45 minutes under the resolution that passed on Thursday to ask questions, the rest of the members get 5 minutes. Adam Schiff gets to call the witnesses he wants, but Republicans have to first submit a list to Adam Schiff to get his approval for any witnesses we or the White House might want,” Jordan explained.

Asked where is this going and what has he learned from the testimonies that he’s been exposed to, Rep. Jordan replied, “We can’t get into the substantive matter, but we know this: we’re less than 12 months before the next election. And Pelosi and Schiff’s ‘unfair and partisan process’– they’re trying to impeach the President of the United States, again, a year before the election, based on an anonymous whistleblower with no first-hand knowledge, who has a bias against the President, whom it’s been reported– worked with Joe Biden.” (Continued Below)

Jordan then asked, “Oh, by the way, Maria, who’s the only member of Congress who knows who this individual is, who started this whole thing? 435 members of Congress, only one knows who the whistleblower is, Adam Schiff. How is that fair? None of the rest of us get to know– more importantly, you and the press don’t get to know. Most importantly, the American people don’t get to know. We’d like to evaluate this guy’s credibility– find out who he or she may have talked to form the basis of the complaint they filed with the inspector general.”

“So this is just an unfair and partisan as it gets. They’re making the rules up as they go along and then, those rules that they make up, they don’t even follow them,” he added.

Bartiromo noted there is speculation and reporting that the whistleblower may have worked with former CIA Director John Brennan during the 2016 election, and perhaps “putting the bread crumbs around that there was collusion between Donald Trump and the Russians.” She asked Jordan if that is true and what is going to happen with John Brennan as we wait for the Inspector General report?  (Continued Below)

Jordan said he wasn’t sure if the reporting was accurate, but he pointed out that Schiff said 6 weeks ago, “We need to hear from the whistleblower, we need to have him come testify.”

“That’s the only thing that has changed, so now, Adam Schiff has changed his tune. I think that’s interesting as we move forward. I think the American people have the right to know who the individual is, who started this whole thing. 63 million people voted for Donald Trump in 2016, they have a right to know what this is all based on and what the Democrats are doing,” he added.

A lawyer for the whistleblower who reported concerns about the president’s dealings with Ukraine told CBS News he offered to have Republicans on the House Intelligence Community submit questions to his client directly without having to go through the committee’s Democratic majority.

Attorney Mark Zaid told CBS News he contacted Representative Devin Nunes, the committee’s ranking member, on Saturday to say his client is willing to answer Republicans’ questions under oath and penalty of perjury if lawmakers submitted written questions to the whistleblower’s legal team. The inspector general of the intelligence community, a Trump appointee, could verify the whistleblower’s identity in order to satisfy the committee’s minority members while protecting the individual’s anonymity, reported CBS. (Video Below)

“2/Despite long standing policy of HPSCI to protect #whistleblowers, especially anonymity (btw, this was consistent with my efforts w/GOP on #Benghazi), GOP has sought to expose our client’s identity which could jeopardize their safety, as well as that of their family,” he added.

2/Despite long standing policy of HPSCI to protect #whistleblowers, especially anonymity (btw, this was consistent with my efforts w/GOP on #Benghazi), GOP has sought to expose our client's identity which could jeopardize their safety, as well as that of their family.

“3/We have directly engaged GOP as to the irrelevance of the whistleblower’s information and identity (including addressing any issue of bias), but with little effect in halting the attacks. Btw, countless OIG complaints are filed anonymously & full of hearsay. It’s common,” Zaid wrote.

“4/We offered HPSCI (& SSCI), both Majority & Minority, to have #whistblower answer questions in writing, under oath & penalty of perjury. Obviously, per House rules GOP is beholden to DEMs,” he said.

4/We offered HPSCI (& SSCI), both Majority & Minority, to have #whistleblower answer questions in writing, under oath & penalty of perjury. Obviously, per House rules GOP is beholden to DEMs.

We, however, are not.

“5/Being a whistleblower is not a partisan job nor is impeachment an objective. That is not our role,” Zaid continued. “6/So we have offered to @DevinNunes, Ranking HPSCI Member, opportunity for Minority to submit through legal team written questions to WBer. Qs cannot seek identifying info, regarding which we will not provide, or otherwise be inappropriate. We will ensure timely answers.”

6/So we have offered to @DevinNunes, Ranking HPSCI Member, opportunity for Minority to submit through legal team written questions to WBer. Qs cannot seek identifying info, regarding which we will not provide, or otherwise be inappropriate. We will ensure timely answers.

“END/We stand ready to cooperate and ensure facts – rather than partisanship – dictates any process involving the #whistleblower,” Zaid added.