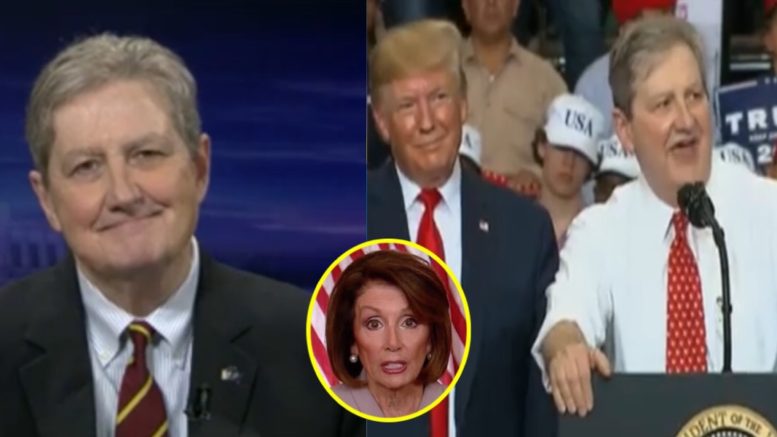 Appearing alongside President Trump at Wednesday’s rally, Sen. Kennedy accused Democrats of trying to distract from the administration’s successes.

“Speaker Nancy Pelosi is trying to impeach [Trump],” Senator Kennedy declared Wednesday during the rally. “I don’t mean any disrespect, but it must suck to be that dumb!”

Bill Hemmer said the audience loved Senator Kennedy’s comments but asked if what he said during the rally was too much. Kennedy responded, “Well, I didn’t mean disrespect, but I do think what I said was accurate.”

“Let me say it again: I think that what Speaker Pelosi is doing here is not only dumb, but it’s dangerous. It’s a partisan impeachment, clearly. All impeachments, I guess, are political. But, this one’s 100 percent political and it’s going to establish a new norm for America that I think is bad for us,” he predicted.

Sen. Kennedy said the other process that offends him as an American is that “this process is rigged.” (Continued Below)

“I mean, this is like a professional wrestling smackdown,” the Louisiana Senator expressed. “You know, it’s all scripted, and that’s not right. That’s just not fair.”

“Due process should matter. And, I think Speaker Pelosi intends to give the President a fair and impartial firing squad, and she made up her mind before she saw the facts,” he concluded. (Video Below)

Senator Kennedy’s full remarks; defending his comments from the rally start at 5:20 into the video:

Sen. Kennedy also said on Friday that “you have to be careful what you ask for,” adding that “Pelosi is going to ‘elevate partisan impeachment'”.

Question: "Did you really mean no disrespect when you said that Speaker Pelosi –"

Sen. John Kennedy: "Sure I did. Let me tell you why I said that in part…" pic.twitter.com/8U4noa9NK4

He added, “I don’t think any fair-minded person can disagree with the proposition that this is so far and will continue to be a partisan impeachment.”

Sen. John Kennedy: "I don't think any fair-minded person can disagree with the proposition that this is so far and will continue to be a partisan impeachment." pic.twitter.com/8MNTCmIVLd

(Related: Sen. Kennedy On Dems’ Impeachment ‘Resolution’: “I Liken It To Trying To Paint On Rotten Wood”)