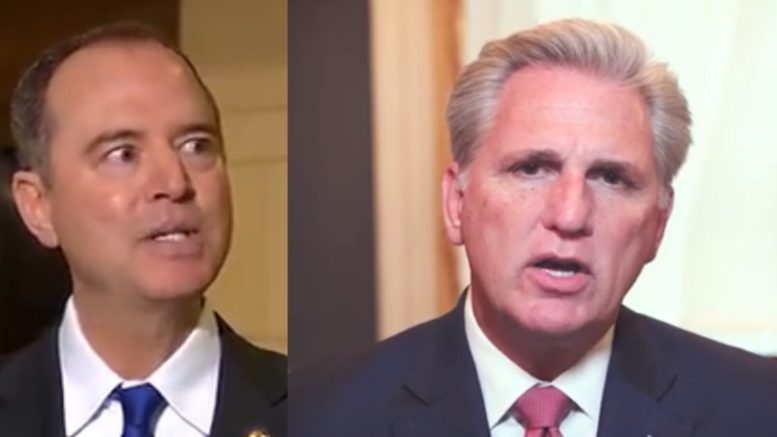 The GOP sent their witness list to Schiff, which included Hunter Biden, the son of former vice president Joe Biden, and the anonymous intelligence community whistleblower, whose complaint about a July 25 phone call between President Trump and Ukraine President Volodymyr Zelensky set off the impeachment inquiry.

Schiff rejected the request by Republicans to have the alleged whistleblower testify at next week’s public impeachment inquiry hearings, claiming that their testimony was “redundant and unnecessary.” Schiff himself said in September the whistleblower would appear before Congress “very soon,” but has since backtracked after he admitted his staff met with the whistleblower.

House Minority Leader Kevin McCarthy said he came up with the witness list with the Ranking Member of the House Intel Committee, Devin Nunes (R-CA) along with the House Oversight Committee and House Foreign Affairs. “We looked at it; we looked at all [that] has transpired,” he said.

“Maria, it is clear now more than ever, this is a ‘calculated coup’ and it is being orchestrated by Adam Schiff, McCarthy said. “We are watching him orchestrate a takedown of a president after we just celebrated 30 years of taking down the Berlin Wall.” [Emphasized]. (Continued Below)

Bartiromo believes Democrats are trying to move fast with their “impeachment efforts” because they want to have it done before the American people go to the polls and make their choice for the president in 2020.

Asked about the time and what he’s expecting in terms of next week’s upcoming hearings, and when it will go to a vote for impeachment, the House Minority Leader said, “We are less than a year away from reelecting our president. Why won’t they trust the American public? But the other reason why they really want to go fast is because… what did we find out? Remember Adam Schiff wanted the whistleblower.”

“Now, we found out he met with him. One of the key witnesses is the former U.S. Ambassador to Ukraine, Marie [Yovanovitch]. What did we find out now? That she perjured herself– that she lied in her own deposition– that she did with her own personal email account, contacted a Democrat congressional staffer concerning a ‘quite delicate, time-sensitive matter.’ And this was just two days after the whistleblower’s complaint, that kick-started the whole inquiry. This has been orchestrated. And if it goes out longer, we will find the lies, we’ll find how they calculated the coup. We’ll find more about the whistleblower’s attorney and others,” McCarthy explained. (Video Below)

“Remember this: when Adam Schiff said he wanted the whistleblower to testify and now he does not, he’s fighting us on it because everything we found out is his association. In a federal criminal trial, if your case relies on an informant, you must produce the informant a trial. They must face their accuser. But now, he’s trying to protect that individual, because of what we’re finding out of their own background and his association with him?” McCarthy asked.

Ranking member of the House Oversight Committee, Jim Jordan (R-OH), has been assigned by House Minority Leader, Kevin McCarthy, to serve on the House Intelligence Committee so he can participate in questioning in the open Trump impeachment inquiry hearings that start next week. He will take the place of Congressman Rick Crawford (R-AR).

McCarthy tweeted on Friday, “I am appointing [Jim Jordan] to the Intelligence Committee—which has now become the Impeachment Committee—where he will continue fighting for fairness and truth. [Rick Crawford] has been an exemplary member of the committee and will rejoin it when this Democrat charade is over.

.@GOPLeader talks about moving @Jim_Jordan To the impeachment committee. He says the house of cards is already starting to fall on their selves. pic.twitter.com/yJ90ADvGts