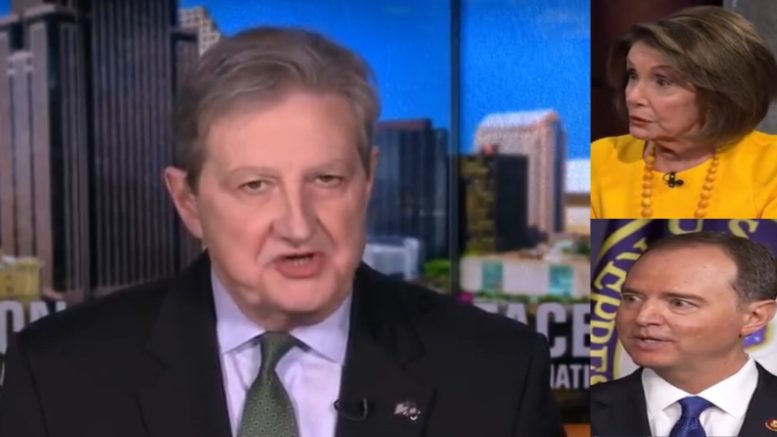 Louisiana Republican Senator, John Kennedy, spoke with Margaret Brennan on “Face the Nation” Sunday where he pushed back at the CBS host after she seemingly was trying to sell him on “impeachment” after the transcript of Lt. Col. Alexander Vindman’s transcript was released to the public.

“Is there anything you could hear from Lt. Col. Vindman, if and when he’s called to testify, that would lead you to ever vote for the removal of the president?” Margaret Brennan asked Senator Kennedy.

The Louisiana Senator explained that he has to “hear the testimony.”

“So that means maybe?” Brennan giddily asked of Sen. Kennedy.

“If you try to assess how a trial is going for a defendant, you don’t just listen to the lawyers opening statement and you don’t just read the transcript. You sit there and listen to all the testimony, the cross-examination and the context,” he explained. “And I think Speaker Pelosi’s decision and Adam Schiff’s decision to prevent the Republicans from calling their own witnesses in the live testimony, is just ‘doubling down on stupid’. The American people, I think, are gonna look at this and go, ‘I get it. They’re gonna give the President a fair and impartial firing squad.’ And that’s not due process.”

Asked if he thinks Lt. Col. Vindman lacks credibility, Sen. Kennedy responded, “I don’t know. I wasn’t allowed to hear him. What I am telling you is, if it can be demonstrated that the president asked for and had the requisite state of mind, that the president asked for an investigation of a political rival, that’s over the line. But, if he asked for an investigation of ‘possible corruption’ by someone who happens to be a political rival, that’s not over the line.” (Continued Below)

Brennan tried again, “So over the line, does that mean impeachable? Is there something that could potentially persuade you to vote for removal?”

“I can’t answer that, Margaret. [Be]cause that encompasses all possible scenarios. That’s like asking me, ‘If I didn’t go fishing Saturday, how many fish would I have caught?’ All I’m saying is, that it ought to be fair, … public. I read somewhere that democracy dies in darkness. It ought to be public, both sides ought to be able to call their witnesses in front of God and country and the American people. And then, let the American people decide,” Sen. Kennedy suggested. “And the president and his council should be allowed to participate. Now I think that would be fair.”

“I will happily judge the evidence. But you can’t limit the witnesses as Chairman Schiff and Speaker Pelosi are doing– selectively leak portions of the transcript that favor your opinion to friendly members of the press, who lap it up like a puppy. I don’t think any fair-minded person in the Milkyway believes that Speaker Pelosi or Chairman Schiff are impartial here. So, they can at least follow due process,” he added. (Video Below)

Schiff, however, rejected the request by Republicans to have the whistleblower testify at next week’s public impeachment inquiry hearings, claiming that their testimony was “redundant and unnecessary.” Schiff himself said in September the whistleblower would appear before Congress “very soon,” but has since backtracked after he admitted his staff met with the whistleblower.