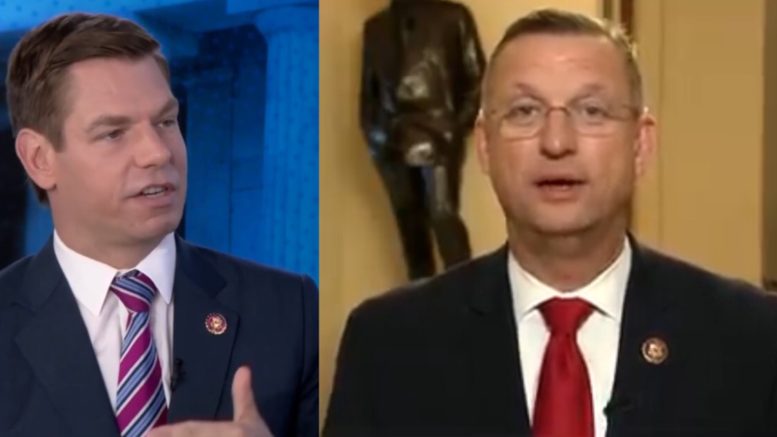 Sunday on CBS’s “Face the Nation”, Rep. Eric Swalwell (D-CA) spoke with host Margret Brennan where he claimed House Democrats have enough evidence from their closed-door depositions to show there is an “extortion scheme” by President Trump pertaining to the phone call on July 25 involving the president and Ukrainian president Zelensky.

Swalwell further claimed during the interview “For the most part, [witnesses] have not been coordinating”, to which Ranking Member of the House Judiciary Committee, Doug Collins (R-GA), called out the California Congressman in regards to his questionable statement.

Asked if he expects anything new from the testimonies that will be made public this week, Swalwell said, “These witnesses have been fairly consistent and for the most part, they have not been coordinating or talking to each other. … These witnesses should come public and the American people should judge for themselves, as well as we will, as to what happened here.” [Emphasis added]

Rep. Doug Collins took note of Swalwell’s statement about the witnesses “not coordinating” and called him out.

“What about the individual leading the investigation—⁦⁦ [Rep. Adam Schiff] coordinating with the whistleblower before a complaint was even made?” the Georgia Congressman wondered. (Continued Below)

As reported by Fact Check, the New York Times broke the story on Oct. 2 that Schiff knew about “the outlines” of the whistleblower’s concerns before the Aug. 12 complaint was filed. The whistleblower had contacted an intelligence committee aide after passing along concerns to the CIA’s top lawyer and being “[c]oncerned about how that initial avenue for airing his allegations through the C.I.A. was unfolding,” the Times reported.

Schiff has since reversed his statement. “I was really thinking along the lines of wanting to get him to come in to testify,” Schiff told the Daily Beast. “I regret that I wasn’t much more clear.” [Emphasis added].

Further, former Ukraine U.S. Ambassador, Marie Yovanovitch, who testified behind closed doors, had communicated with a Democratic congressional staffer with her personal email account, a breach of State Department protocol, which pertained to a “quite delicate” and “time-sensitive” matter two days after the whistleblower complaint was filed, and a month before the complaint became public.

The emails appear to contradict Yovanovitch’s deposition on Capitol Hill last month, in which she told U.S. Rep. Lee Zeldin (R-NY) about an email she received Aug. 14 from the staffer, Laura Carey — but indicated under oath that she never responded to it, as reported by Fox News.

(Related: Zeldin Unveils How Fmr Ukraine Ambassador May Have Perjured Herself In A Section Of Her Testimony)

When asked directly whether she replied to the staffer, Yovanovitch testified that only someone in the “Legislative Affairs Office” at the State Department had responded to Carey, to the best of her knowledge. (Video Below)

Rep. Swalwell claims, “for the most part, [witnesses] have not been coordinating…”

For the most part? What about the individual leading the investigation—⁦⁦@RepAdamSchiff—coordinating with the whistleblower before a complaint was even made? https://t.co/OrCgUM31fG