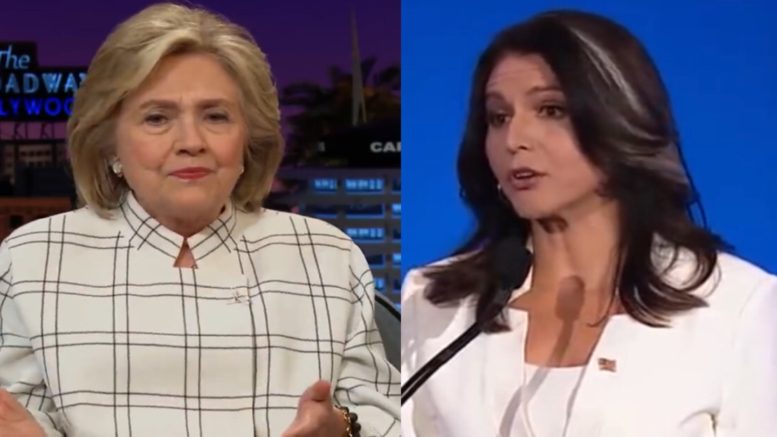 “Your statement is defamatory, and we demand that you retract it immediately,” Gabbard’s lawyer wrote in a letter, demanding that Clinton verbally retract the comments and post the retraction on Twitter, reported The Hill.

Hillary Clinton made the remarks last month on the “Campaign HQ” podcast. Speaking with host David Plouffe, Hillary Clinton said, “I’m not making any predictions, but I think they’ve got their eye on somebody who is currently in the Democratic primary, and they’re grooming her to be the third-party candidate.”

“She’s a favorite of the Russians. They have a bunch of sites and bots and other ways of supporting her so far and that’s assuming Jill Stein will give it up, which she might not because she is also a Russian asset,” Clinton claimed.

“It appears you may now be claiming that this statement is about Republicans (not Russians) grooming Gabbard,” Gabbard’s lawyer wrote in the letter. “But this makes no sense in light of what you actually said. After you made the statement linking Congresswoman Gabbard to the Russians, you (through your spokesman) doubled down on it with the Russian nesting dolls remark.”

Gabbard took to Twitter last month to respond to Clinton, where she ripped her as the “queen of warmongers, embodiment of corruption, and personification of the rot that has sickened the Democratic Party”. (Continued Below)

Tulsi Gabbard responded to Clinton on Twitter in a series of tweets and wrote, “Great! Thank you @HillaryClinton. You, the queen of warmongers, embodiment of corruption, and personification of the rot that has sickened the Democratic Party for so long, have finally come out from behind the curtain. From the day I announced my candidacy, there has been a concerted campaign to destroy my reputation.”

“We wondered who was behind it and why. Now we know — it was always you, through your proxies and powerful allies in the corporate media and war machine, afraid of the threat I pose,” she continued.

“It’s now clear that this primary is between you and me. Don’t cowardly hide behind your proxies. Join the race directly,” Gabbard dared. (Video Below)

Tulsi Gabbard hit back at Clinton’s remarks on “The View” last week, and she also put Joy Behar in her place. Begin the video at 1:05: