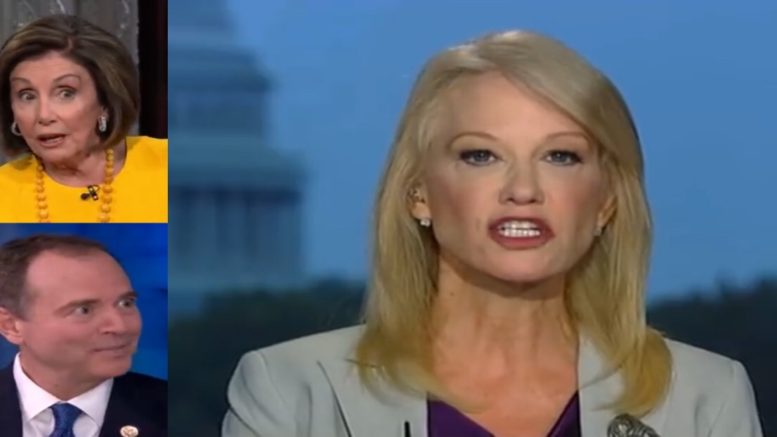 Asked how concerned the President is over the hearings, once they begin, Conway assured that the Commander in Chief is “not concerned at all”, adding, “The major concern we have is that the business of the people in this country is not being done.”

Referring to the Capitol building behind her, she expressed that it’s not a movie set or a cardboard cut-out. “It’s where your Representatives work for you ladies and gentlemen. They’re wasting your money and their time. There’s no vote on USMCA, there’s no legislative solution on DACA, there’s no vote on infrastructure, health care,” Conway said.

Turning her attention to Ukraine, Conway explained that Ukraine got more aid from President Trump than the previous president. “Ukraine gets more aid from the U.S. than any other country. Some of the witnesses testified as much, under oath. So our concern is that the business of the people is not being done. Where’s the trade deal? Where’s the drug pricing reduction?” Conway asked.

Hemmer said as the hearings start tomorrow, House Intel Chairman, Adam Schiff (D-CA) will begin the opening statement, to which Conway interjected and asked, “Will Adam Schiff be under oath? I think he should be under oath.”

He pointed out that Schiff will approach his opening as a prosector: “He will make claims of abuse of power, … obstruction of justice. How will the White House respond?” he asked Conway. (Continued Below)

“Adam Schiff has no credibility,” Conway said bluntly. “The last time he delivered an opening statement to the public, to the entire world to see, it was a parody of a conversation between the Ukrainian and American presidents that did not exist. He has zero credibility. I called for his resignation on your network in March. .. The president called for his resignation last week because he can’t be trusted to honest and credible as he oversees these hearings.”

“And this is a serious point: He’s been a partisan and he’s been growing mushrooms, having witnesses testify in the dark, outside of the view of the public. Contrast that with the most transparent president in history. He tells you every day what he thinks on any number of topics, through social media– near the helicopter, through pool sprays, on live TV interviews. I think if Adam Schiff is gonna make people raise their right hand and be under oath when they speak, I would politely suggest… what does he have to hide? Why doesn’t he go under oath before he delivers another opening statement to the country?” Conway asked.

The President tweeted on Tuesday: “I will be releasing the transcript of the first, and therefore more important, phone call with the Ukrainian President before week’s end!” (Continued Below)

Asked when the president will release the next transcript, Conway said, “It could happen as soon as tomorrow. The president has said definitely by week’s end. He doesn’t need to do this. These calls with foreign leaders, by their very nature, are classified. He has to declassify these calls for them to become public. The Democrats and their pals in the mainstream media never thought the president would release the first transcript.”

“Now, lets review for everybody: the transcript that’s been released from the July 25th call– that was a call between the Ukranian and American president to congratulate the Ukranian president on the parliamentary legislative elections. The one in April was to congratulate Zelensky on his election. And remember, he ran on ‘draining the swamp’, on an anti-corruption agenda. That’s the entire point of these calls,” she noted.

“C.I.A. does not stand for conjecture, interpretation, and assumptions!” Conway declared. “What are we doing? We’re going to impeach and remove a president, who was democratically elected, handily by the way, in the electoral college, and close to being reelected less than a year away, because people on Capitol Hill don’t like him? And the 2020 crowd has no idea how to beat him at the ballot box? This is America! This is a democracy.” [Emphasized]. (Video Below)