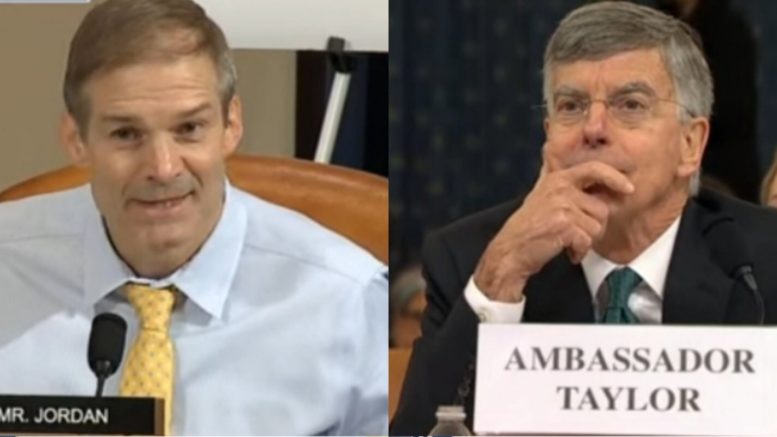 Jordan challenged Taylor over his claims that he understood President Trump to be holding up aid and more as he sought to pressure Ukrainian President Volodymyr Zelensky to announce a Biden-related probe.

Taylor has said he had a “clear” understanding that the release of aid to Ukraine was linked to a request for investigations of former Vice President Joe Biden and his son, Hunter, and Burisma Holdings, a Ukrainian energy company that counted the younger Biden as a board member. Jordan brought up three meetings that Taylor had with Zelensky between the time the aid was delayed and eventually released, and Taylor confirmed that “there was not discussion of linkage” during any of them, as reported by Fox News.

Taylor responded, “Mr. [Jordan], I was not wrong about what I told you, which is what ‘I heard’. That’s all I’ve said. I’ve told you what I heard.”

Jordan fired back, “And that’s the point. What you ‘heard’ did not happen. It didn’t happen. You had three meetings with the guy. He could’ve told you. He didn’t announce he was gonna do an investigation before the aid happened. It’s not just ‘could it have been wrong’, the fact is, it was ‘wrong’ because it didn’t happen.” (Continued Below)

“The whole point was you had a ‘clear understanding’ that aid will not get released unless there is a commitment, not maybe, not I think the aid might happen, it’s my hunch it’s gonna get released. You used ‘clear language, clear understanding, and commitment’. And those two things didn’t happen, so ‘you had to be wrong’,” the Ohio Congressman told Ambassador Taylor.

Ambassador Taylor responded: “Mr. Jordan, the other thing that went on when that assistance was on hold, is we shook the confidence of a close partner in our reliability.”

“We got six people having four conversations in one sentence, and you just told me this is where you got your clear understanding,” Jordan said. “And you’re their star witness.”

Trump campaign press secretary Kayleigh McEnany seized on the moment, using it to argue against Taylor’s understanding of social media, as noted by Fox News.

➡️ “6 people having 4 conversations in 1 sentence.”

“I’ve seen church prayer chains easier to understand than this!”

(Related: Republicans Call Out Adam Schiff After He “Apparently Changed The Rules Mid-Hearing”)