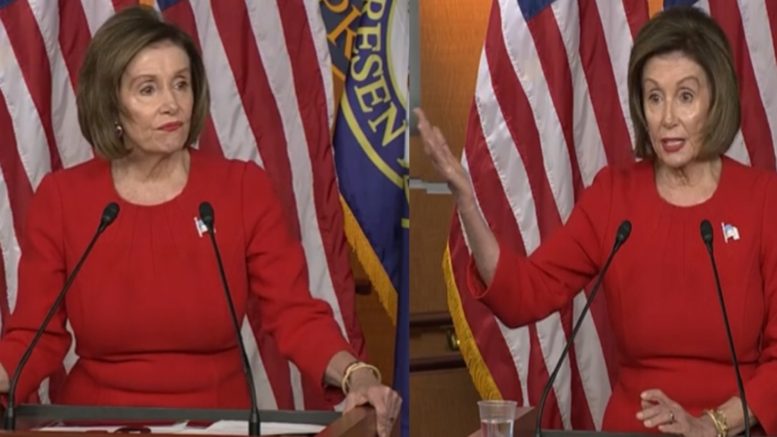 During a press conference on Thursday, House Speaker Nancy Pelosi (D-CA) accused President Trump of committing “bribery” along with claiming that the Commander in Chief’s “efforts to cover up his betrayal of his oath of office almost make the things Nixon did look small.”

Pelosi also said she is upholding the Constitution, but added that President Donald Trump “must prove his innocence.” Further, she took questions from reporters and became frustrated when asked about the “whistleblower and hearsay from witnesses”.

During the press conference, Nancy Pelosi accused President Trump of committing a quid pro quo- “bribery,” adding that it’s in the Constitution attached to “impeachment proceedings.”

When asked what the actual bribe was, Pelosi claimed, “The bribe is to grant or withhold military assistance in return for a public statement of a ‘fake investigation’ into the elections. That’s bribery.”

Without giving the President due process, to which one is “innocent until proven guilty”, Pelosi suggested, “If the President has ‘anything exculpatory’, Mr. President, that means, do you have anything that shows your innocence, then he should make that known.”

A reporter also asked Pelosi why the legal rights of the whistleblower should prevail over President Trump’s right to confront his accuser. She responded by dodging the President’s rights, calling the reporter, “Mr. Republican talking points,” adding that “when you talk about the whistleblower, you’re coming into my ‘wheelhouse’, …the whistleblower is there to ‘speak truth to power.'” (Continued Below)

Further, when asked about the Republican’s criticism of “secondhand” testimony, Pelosi became flustered. “I’m wondering if you would think it would be worth waiting for those who have heard first hand– John Bolton, Mick Mulvaney to testify,” the reporter asked of Pelosi.

(Related: Sen. Lindsey Graham: “I Promise The Country, We’re Not Gonna Try The President Based On ‘Hearsay’”)

“Cheryl, Cheryl, don’t fall into the ‘secondhand stuff,'” Pelosi said as she downplayed hearsay. “Really! That is such a fraudulent proposition put forth by the Republicans. That is such a fraudulent proposition, and they know it. That’s why they’re talking about process, rather than the substance of what we have heard. I just won’t even dignify what they’re saying, in that regard, I just won’t. (Video Below)

Pelosi accused the President of “bribery”:

Nancy Pelosi said Trump committed “bribery,” an impeachable offense, by trying to force Ukraine into tarnishing a political rival to help him in the 2020 election.

Still, she cautioned, she isn’t yet ready to say whether the House will vote to impeach https://t.co/dTHyocJHMg pic.twitter.com/qTrR3x4v8J

Pelosi: “If the President has anything exculpatory, Mr. President, that means, do you have anything that shows your innocence? Then he should make that known.”

Speaker Pelosi: "If the president has something that is exculpatory — Mr. President, that means do you have anything that shows your innocence — then he should make that known … So far, we haven't seen that, but we welcome it." Via ABCpic.twitter.com/h87oGKqMr7

Pelosi calls the reporter “Mr. Republican talking points” and covers for the whistleblower:

.@SpeakerPelosi to @JamesRosenTV: "I say to you, Mr. Republican Talking Points, what I said to the President of the United States, when you talk about the whistleblower, you're coming into my wheelhouse."

Pelosi says GOP criticism of "secondhand" testimony in the inquiry is "fraudulent."

"One the one hand they say that it is secondhand; on the other hand they obstruct all of the people who they would consider to have firsthand knowledge from testifying." https://t.co/AxlJNcr705 pic.twitter.com/7JsY7uaIik

Pelosi claimed, “Impeachment hearings are about ‘patriotism’ and ‘honoring our oath of office’, and not about politics.”

Nancy Pelosi claims Democrats are trying to impeach Trump with a “heavy heart” and it, of course, has nothing to do with politics.

Instead, she says, it’s about “patriotism.”

(Related: Schiff Denies Knowing The Whistleblower’s Identity As Jordan Urges Them To Testify: “This Is A Sad Day For This Country”)