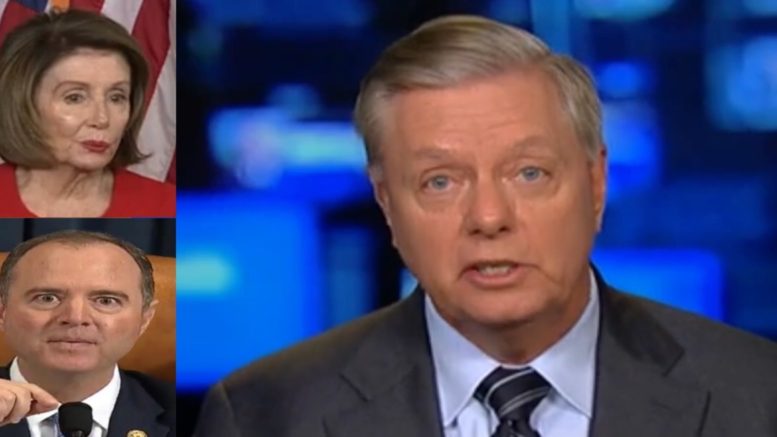 Ukraine Ambassador William Taylor and Deputy Assistant Secretary of State George Kent were the Democrats’ first “star witnesses”, who testified that they had knowledge of the president’s July 25 phone call with Ukrainian President Zelensky.

“Here’s what I promise the country: we’re not gonna try the president of the United States based on hearsay,” Senator Lindsey Graham vowed. “So any resolution setting up a trial in the Senate, I’m gonna make sure that hearsay cannot be the basis of an impeachment allegation. If you invoke the hearsay rule, what would be left?”

During Wednesday’s hearing, Rep. Jim Jordan (R-OH) challenged Ambassador Taylor’s testimony and grilled the diplomat on what he repeatedly called his “clear understanding” that US military aid dollars would be held up until Ukraine complied with the president’s request to probe Joe and Hunter Biden’s dealings in the nation. “With all due respect, Ambassador, your clear understanding was wrong,” Jordan told Taylor.

“Ambassador Taylor recalls that Mr. Morrison told Ambassador Taylor that I told Mr. Morrison that I had conveyed this message to Mr. Yermak on September 1, 2019, in connection with Vice President Pence’s visit to Warsaw and a meeting with President Zelensky,” Jordan read out loud from Sondland’s statement. “We got six people having four conversations in one sentence, and you just told me this is where you got your clear understanding. … And you’re their star witness.”

Graham explained that Ukraine got the money and nobody investigated Joe Biden in the Ukranian government. “There’s no there-there. But let’s go back to the idea of what kind of trial you would conduct. If you excluded hearsay like every other court in the land, there’s nothing there. And if you allowed the president to confront his accuser, you would have to call the whistleblower,” he said.

“Here’s the question I have about the whistleblower: Was the whistleblower connected to Joe Biden in any way? Did the whistleblower engage in an effort to get the Ukrainian President Poroshenko to weigh in and stop the investigation of this gas company?” Graham asked. “Was there a connection between the whistleblower and Biden’s effort to call the Ukraine? Now that’s very important to me, and we can not legitimize an impeachment based on an anonymous source. If you do that, no president will be able to survive.” (Video Below)

Graham also asked a question to his fellow members of Congress: “How would you like to be in the shoes of Donald Trump? You’re accused of something based on a whistleblower, who’s anonymous and you can’t call witnesses on your behalf.”

“This is not about getting to the truth. This is about destroying the president of the United States. Adam Schiff is not an independent person here. … Here’s my point: Did the president of Ukraine, Poroshenko, the previous president, did he receive a call from Joe Biden and was that call related to the investigation of the gas company that Hunter Biden was sitting on?” Graham asked. I’m gonna write it if nobody else will– a letter to the former President of the Ukraine. Did you ever get a call from Joe Biden calling off the dogs, regarding this gas company?”

He concluded by saying “If the [House] impeaches the president of the United States, I want to find out if, in fact, Schiff and his staff met with the whistleblower. … If there’s a trial in the Senate, one of the witnesses will be Adam Schiff because if he, in fact, did meet with the whistleblower and coached the guy up, I think that’s relevant to the impeachment inquiry itself.”

Aid was delayed by just 55 days.

During that time, we verified that President Zelensky was the real deal. pic.twitter.com/TWJbvGj2iz

Rep. Mike Quigley (D-IL) claimed during Wednesday’s hearing, “Hearsay can be much better evidence than direct.”

"Hearsay can be much better evidence than direct."

So not only are the Democrats ADMITTING their entire impeachment sham is based off of hearsay, but now they're trying to defend it. What a joke! pic.twitter.com/14oYqp2UGJ

(Related: Republicans Call Out Adam Schiff After He “Apparently Changed The Rules Mid-Hearing”)