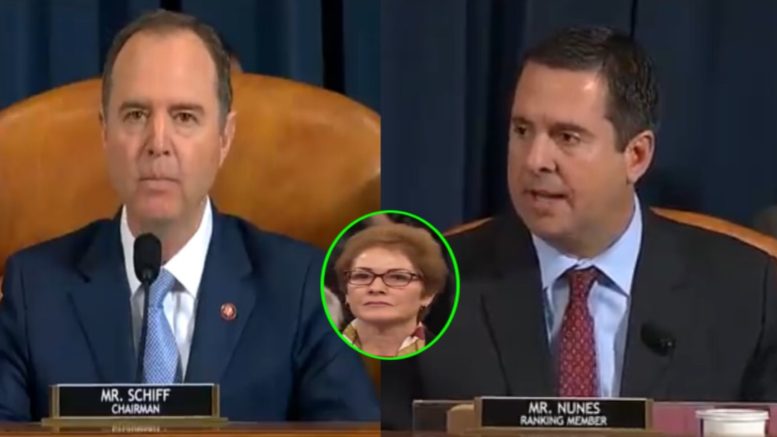 In his opening, Nunes slammed Democrats over their “day-long TV spectacles” before he read the newly released transcript into the record, of President Trump’s first phone call with Ukranian President Zelensky, that was released moments before the hearing started.

“It’s unfortunate that today and for most of next week, we will continue engaging in the Democrats day long TV spectacles, instead of solving the problems we were all sent to Washington to address,” Rep. Nunes began in his statement and pointed out that USMCA is ready for approval, which is a trade agreement deal with Canada and Mexico that would create jobs and boost the economy. He also noted funding the government has not been approved, which expires next week, along with funding for the military.

“Instead, the Democrats have convened us once again to advance their operation to topple a duly-elected President. I’ll note that five Democrats on this committee had already voted to impeach this President before the Trump-Zelensky phone call occurred. In fact, Democrats have been vowing to oust President Trump since the day he was elected. So, Americans can rightly suspect that his phone call with President Zelensky was used as an excuse for the Democrats to fulfill their ‘Watergate fantasies,'” Nunes continued.

The Ranking Member said:  “I was glad that on Wednesday after Democrats staged 6 weeks of secret depositions in the basement of the Capitol, ‘like some king of strange cult’, the American people finally got to see this farce for themselves,” noting that Ambassador William Taylor and George Kent, who testified Wednesday, did not have first-hand information, but instead hearsay, “rumors”.

“The problem with trying to overthrow a president, based on this type of evidence, is ‘obvious.’ But that’s what [Democrats’] whole case relies on. Beginning with second-hand and third-hand information, cited by the whistleblower,” Nunes said. “That’s why on Wednesday, the Democrats were forced to make the absurd argument that ‘hearsay’ can be ‘much better evidence than direct evidence'”.  (Continued Below)

“Chairman Schiff claimed not to know who it is, yet he also vowed to block us from asking questions that could reveal his or her identity. Republicans on this committee are left wondering how it’s even possible for the Chairman to block questions about a person whose identity he claims not to know,” Nunes continued. “The American people may be seeing these absurdities for the first time but Republicans on this Dias are used to them. Until they secretly met with the whistleblower, Democrats showed little interest for the last three years in any topic aside from the ridiculous conspiracy theories that President Trump is a ‘Russian agent.'”

“When you find yourself on the phone, like the Democrats did with the Russian pranksters offering you ‘nude pictures of Trump’, and afterward you order your staff to followup and get the photos, as the Democrats also did,” he said referring to Schiff. “Then it might be time to ask yourself if you’ve gone out too far on a limb. Even as they were accusing Republicans of colluding with Russians, the Democrats themselves were colluding with Russias by funding the Steele dossier, which was based on Russian and Ukranian sources.” (Continued Below)

The House Intel Ranking Member also slammed Democrats for “turning a blind eye to Ukranian’s meddling in our elections”, adding “the democrats were cooperating with that operation.”

“This was the subject of a July 20, 2017 letter sent by Senator [Chuck] Grassley, to then-Deputy Attorney General Rod Rosenstein. The letter raised concerns about the activities of Alexandra Chalupa, a contractor for the Democratic National Committee, who worked with Ukranian embassy officials to spread ‘dirt on the Trump campaign’. As Senator Grassley wrote, ‘Chalupa’s actions appear to show that she was simultaneously working on behalf of a foreign government, Ukraine, and on behalf of the DNC and the Clinton campaign in an effort to influence, not only the U.S. voting population but U.S. government officials.’

Nunes went on to say that after touting the Steele dossier and defending the FBI’s Russia investigation, which are now being investigated by Inspector General Horowitz and Attorney General William Barr, Democrats on the Intel Committee continue to ignore Ukranian election meddling, even though Alexandra Chalupa “publicly admitted to the Democrats scheme”.

He added they are “blind to the glaring signs of corruption, surrounding Hunter Biden’s well-paid position on the board of a corrupt Ukranian company, while his father served as vice president and point-man for Ukraine issues in the Obama administration. But the Democrats’ media hacks only cared about that issue briefly. When they were trying to stop Joe Biden from running against Hillary Clinton in 2015.” (Video Below)

After listing Democrats’ hypocrisy, he reiterated that no hearings should be held until they get answers to three crucial questions the Democrats are determined to avoid asking.

Before he concluded his opening, Nunes announced that the White House released the transcript of the first official phone call, which occurred April 21, between President Trump and Ukrainian President Volodymyr Zelensky, and read it into the record so there would be no “confusion”.

WH releases transcript of T… by Fox News on Scribd