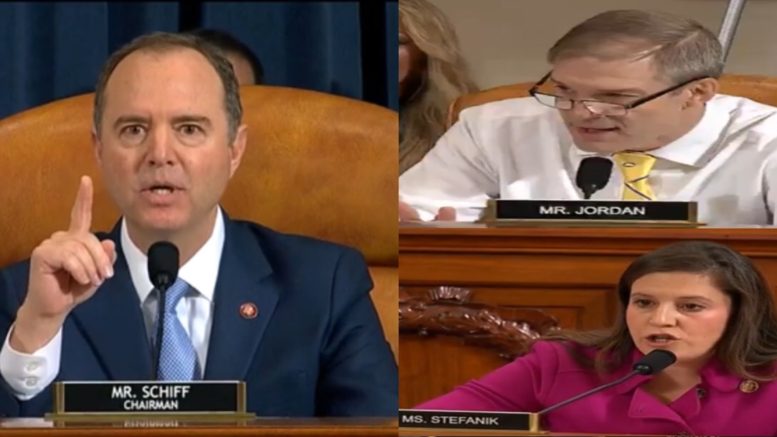 Before hearing testimony from Former Ambassador of the United States to Ukraine, Marie Yovonivich on Friday, the second public Democratic-led impeachment inquiry hearing began with a tense start as Republicans pushed House Intelligence Committee Chairman, Adam Schiff (D-CA) to hear “points of order” regarding concerns they had with how the hearings were being conducted.

Schiff, however, didn’t recognize Rep. Jim Jordan (R-OH), but instead, criticized the White House for not cooperating with the impeachment inquiry against President Donald Trump.

Rep. Elise Stefanik called for a “point of order” under H. Res 660 and asked Schiff, “Will the chairman continued to prohibit witnesses from answering Republican questions, as you’ve done in closed hearings and as did this week when you interrupted our questions?”

Schiff slammed down his gavel and arrogantly said, “The gentlewoman will suspend. That is not a proper point of order.”

Rep. Jim Jordan called a “point of order” next, to which Schiff would not recognize him. “Mr. Chairman there are four transcripts that have not been released,” Jordan said anyway.

“The ranking member was allowed to exceed the opening statement, and I was happy to allow him to do so,” Schiff said. (Continued Below)

Moments before the second public hearing started Friday however, the White House released the first official phone call between President Trump and Ukrainian President Volodymyr Zelensky, which prompted Schiff to respond, demanding that the President release 1000’s of more documents. (See transcript below)

“I do want to respond to the call record. First of all, I’m grateful that the President has released the call record. I would now ask the President to release the 1000’s of other records that he has instructed the State Department not to release, including Ambassador Taylor’s notes, including Ambassador Taylor’s cable, including George Kent’s memo, including documents from the Office of Management of Budget on why the military aid was withheld.”

Jordan interjected and declared, “Mr. Chairman, I want you to release the four transcripts of depositions! That’s my point of order.” But Schiff shot back and said, “The gentleman will suspend.”(Video Below)

Schiff continued, “We would ask the President to stop obstructing the impeachment inquiry and while we are grateful he has released a ‘single-document’. He has, nonetheless, obstructed witnesses and their testimony and the production of 1000’s and 1000’s of other records. And finally, I would say this Mr. President: I hope you’ll explain to the country today why it was after this call and while the Vice President was making plans to attend the inauguration, that you instructed the Vice President not to attend Zelensky’s inauguration.”

Rep. Elise Stefanik called for another “point of order” and said, “So we know clearly you’re going to interrupt throughout this hearing,” to which he would not recognize Stefanik or another Republican.

WATCH: Republicans & Schiff spar at the start of Day 2 of the hearing:

President Trump in April agreed to meet with Ukraine’s president-elect—without preconditions—in the first official phone call between the two leaders, according to a White House transcript released Friday morning, moments before the second public hearing as part of the House’s formal impeachment inquiry into the president.

Trump took the April 21 call with Volodymyr Zelensky while aboard Air Force One. The conversation predated the highly-controversial conversation between the two presidents on July 25, which prompted the House’s impeachment inquiry.

Democrats, relying on a whistleblower complaint that first exposed that call, have claimed the previous call shows evidence of a “quid pro quo”—namely an investigation of a Trump political opponent in exchange for a public meeting between the presidents, and a release of critical U.S. military aid to Ukraine.

But in the transcript of the call released Friday, much of which is formal congratulations, Trump invites Zelensky to the White House, without any mention of investigations—as stated during the July 25 phone call.

WH releases transcript of T… by Fox News on Scribd

(Related: Reporter Asks, “How Can You Call Schiff A Liar Without Proof?” McCarthy Fires Off: “Which Time Do You Want To Talk About Him Lying?”)