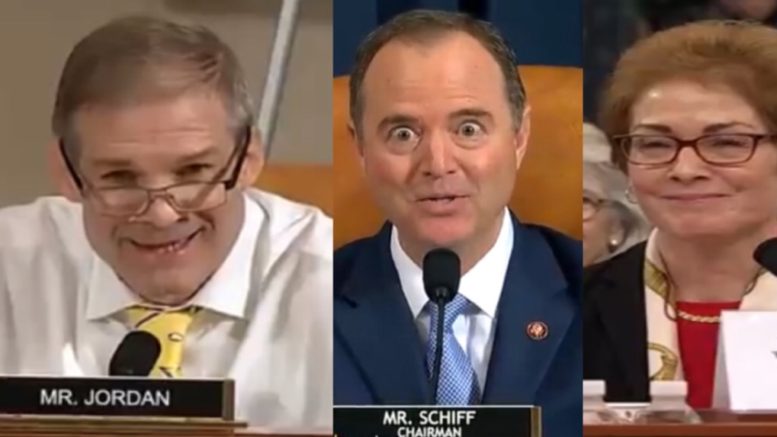 While Jordan was questioning Yovanovtich, however, Schiff interrupted the Ohio Congressman while he was trying to get the former Ambassador to understand a concern President Trump may have had with Ukraine in the 2016 election.

“Should Ambassadors ever try to influence host country elections?” Rep. Jordan began in his line of questioning to Yovanovitch, to which she replied, “No.”

In Yovanovtich’s opening statement, she said: “Parisian of this type is not compatible with the role of a career foreign service officer”.

“But that’s exactly what happened in 2016,” Rep. Jordan explained. “In August of 2016, the very month you went to Ukraine as our Ambassador, the Ukranian Ambassador here in the United States, Ambassador [Valeriy] Chaly, wrote an op-ed in The Hill [and] said this, ‘Trump’s comments send wrong message.'” (Read here)

“So the very month you’re over there as our Ambassador to Ukraine, Ambassador Chaly writes that op-ed. And it wasn’t just that attack on the President, we had former Ukranian Prime Minister, Yatsenyuk, who criticized candidate Trump. We had Mr. Yavakoff, … [who] first alerted you about the efforts of Mr. Guiliani. Mr. Yavakoff, back during this same time period, in the months just prior to the 2016 election, called then-candidate Trump all kinds of names– called him a ‘terrorist’. And of course, we have Mr. Leschenko, a member of parliament, who was a source for Fusion GPS, and now, somewhat famous [Steele] dossier that flowed from Fusion’s work,” Rep. Jordan said. (Continued Below)

“[Leschenko] said this in the Financial Times, … of August 2016, when you first arrived in Ukraine. …’The majority of Ukranian politicians are all on Hillary Clinton’s side. You had several high ranking officials in the Ukranian government, Poroshenko was President of Ukraine– criticize then-candidate Trump, all in the late summer and fall of 2016,” Jordan explained. (Read here)

“What I want to know Ambassador when this was all happening, did you go talk to anyone in the Ukranian government about this?” Jordan asked. “Did you go say to some of these officials, ‘Hey you guys need to knock this off? This perception that Mr. Leschenko said, ‘The majority of Ukranian politicians on Hillary Clinton’s side, that’s not good.’ Did you have that conversation?” he asked Yovanovtich, to which she replied, “No.”

“One of the things we have heard so much over the last six weeks in depositions and frankly, in the hearing on Wednesday, is how important bipartisan support is for Ukraine,” Rep. Jordan pointed out. “Democrats and Republicans agree they want to help Ukraine, in fact, the Democrats’ first witness, their star witness on Wednesday, Mr. Taylor said, ‘Ukraine’s most strategic asset is this bipartisan support.’ And you would agree with that right?” he asked, to which the former Ambassador agreed.

“What I’m wondering is… in 2016, when we know the majority of politicians want Clinton to win, [be]cause it was said by a member of parliament when the Ambassador to the United States to Ukraine writes an op-ed criticizing then-candidate Trump, when Mr. Yavakoff calls Trump all kinds of names, nobody goes and talks to and tells him to knock it off. Did you have any conversations Ambassador, with Victoria Nuland or Sec of State Perry about what was going on in 2016, and this majority of Ukranian politicians being for candidate Clinton, and not opposed to President Trump?” Jordan asked, to which Yovanovitch said, “No, I did not.”

“No one did anything. Do you see why maybe the President was a little concerned about what went on in Ukraine? And you couple that with the corruption level we know existed in Ukraine. You add to that this idea that he’s not a big fan of foreign aid? Why he might be a little concerned about sending the hard-earned tax dollars of the American people to Ukraine?” he asked.

Yovanovitch seemed puzzled and asked, “I’m sorry is there a question there?”

“There was,” Jordan said and smiled. “I’m asking, maybe we can kind of see why the president was a little concerned when you have the highest-ranking officials in the government, the Ambassador criticizing [Trump], parliamentary members, … when you have Yavakoff, … criticizing. All this going on, and when you couple that with the concerns he has about corruption, the concerns about Europe not doing enough, the concerns he has reluctance of sending the hard-earned tax dollars to any country… ” (Continued Below)

Schiff interrupted after giving Jordan a few more seconds to ask his last question and said, “Mr. Jordan, I have indulged you with extra time, and my indulgence is wearing out. There is a question there right?”

Jordan fired back at Schiff, “I appreciate it. Our indulgence wore out with you a long time ago, Mr. Chairman. I’ll tell you that.” [Empasis added].

“I’m about to gavel you down, so if you have a question, I suggest you [ask],” Schiff arrogantly replied.

“I’m asking her do you think President Trump’s concern was justified?” Jordan inquired.

“I can’t speak for the President on this. But what I would say is you’ve listed a number of actions. I think from my point of view, that doesn’t create a Ukranian government strategy to interfere in our elections,” Yovanovtich responded.

Jordan said that’s not what he said, which prompted the judge, jury, and prosecutor Schiff to coach the witness. “Please allow the Ambassador to answer the question,” he said. (Video Below)

“I would just say that U.S. politicians will often criticize policies of foreign counterparts, even perhaps their elections. You know this happens in politics, and I think it doesn’t necessarily constitute interference,” she replied.

(Related: While Questioning Yovanovitch, Nunes Expresses Why The Cmte Is Wasting Their Time Without A “Fact Witness”)