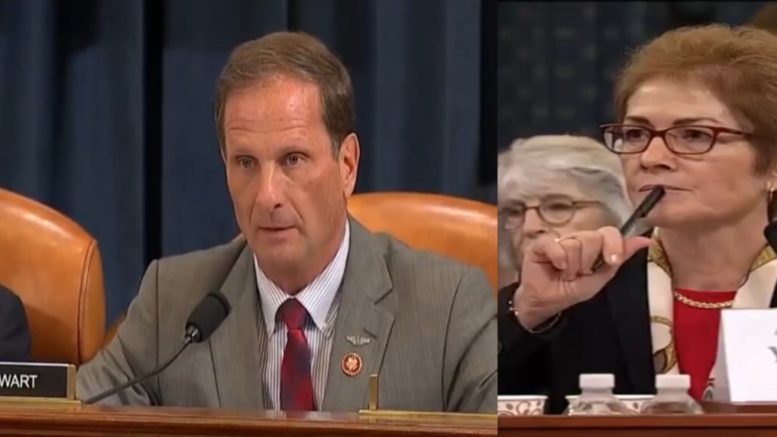 While grilling Yovanovitch, the Utah Congressman asked a few point-blank questions that should have immediately ended Friday’s hearing.

Rep. Stewart began his questions by first welcoming the former ambassador to “year four of the impeachment proceedings” and apologized that she was drug into it.

“For three years we’ve heard these outrageous and frankly unbelievable accusations regarding Russian collusion. Accusations that we know are absolute nonsense. There was no basis at all, despite promises from some members of this committee that they had ‘secret proof’ that would prove this collusion. We know that it was nonsense, but now, in year four, we apparently move on to Ukraine and quid pro quo, culminating yesterday, when the Speaker announced that the president would indeed be impeached and removed from office for ‘bribery’, the Utah Congressman explained.

On Thursday, during a press conference, House Speaker Nancy Pelosi (D-CA) accused President Trump of “bribery“, along with claiming that the Commander in Chief’s “efforts to cover up his betrayal of his oath of office almost make the things Nixon did look small.”

“And with the statement, I would feel compelled to ask you, Madam Ambassador. As you sit here before us, very simply and directly. Do you have any information regarding the President of the United States accepting any bribes?” Stewart directly asked Yovanovitch, to which she replied, “No.”

“Do you have any information regarding any criminal activity that the President of the United States has been involved with at all?” Stewart again directly asked Yovanovitch, to which she replied, “No.”

Bravo from @RepChrisStewart, who just summarized this whole hearing:

Q: "Do you have any information regarding POTUS accepting bribes?"

Q: Do you have any evidence of any criminal activity from POTUS?"

That, there, should be the ballgame