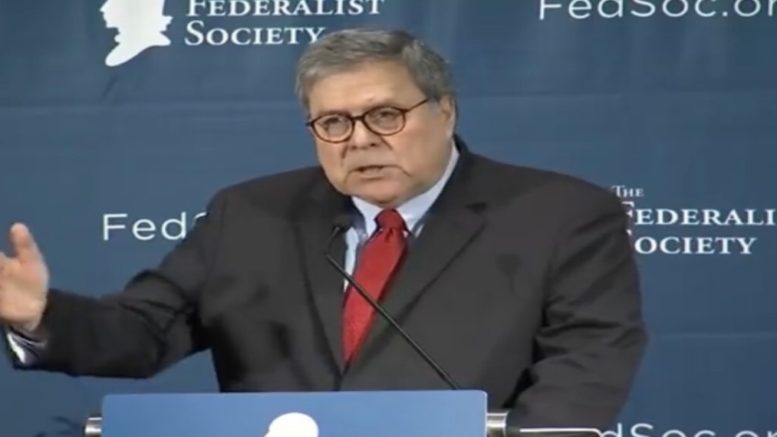 On Friday, Attorney General Bill Barr slammed Democrats for their constant efforts to undermine President Trump in a speech, to conservative lawyers, at the 2019 Federalist Society’s convention in Washington.

Barr accused Democrats who’ve sought to thwart President Donald Trump’s agenda of “using every tool and maneuver to sabotage” the administration, as reported by ABC News.

“Unfortunately, just in the past few years, we have seen these conflicts take on an entirely new character,” Attorney General Bill Barr said.

“Immediately after President Trump won the election, opponents inaugurated what they called ‘the resistance’. And they rallied around an explicit strategy of using every tool and maneuver to sabotage the functioning of the executive branch and his administration,” Barr continued. “The fact of the matter is, in waging a scorched-earth, no-holds-barred war of ‘resistance’ against this administration, it is the ‘left’ that is engaged in a systematic shredding of norms and undermining the rule of law.”

Barr went into detail as he assailed the self-described “Resistance” to Trump, accusing them of adopting “dangerous” and “incendiary” language by implying the sitting government is illegitimate, as per ABC News.

“This is a very dangerous and indeed incendiary notion to import into the politics of a Democratic republic,” Barr said. “The fact is, that, yes, while the president has certainly thrown out the traditional beltway playbook and punctilio, he was upfront about what he was going to do and the people decided that he was going to serve as president.” (Continued Below)

Throughout the hour-long speech, Barr took shots at the legislative and judicial branches for what he described as years of “encroachment” on the powers of the executive, blaming a “knee-jerk tendency [among Democrats and the media] to see the legislative and judicial branches as the good guys, protecting the people from a rapacious, would-be autocrat,” as per ABC News.

AG Bill Barr: "Immediately after President Trump won election, opponents inaugurated what they call 'The Resistance' and they rallied around an explicit strategy of using every tool and maneuver to sabotage the functioning of the executive branch." pic.twitter.com/HJJMczuEpd

Related: In A Letter To AG Barr, Sen. Graham Demands Nine Key Pieces Of Info To Be Declassified