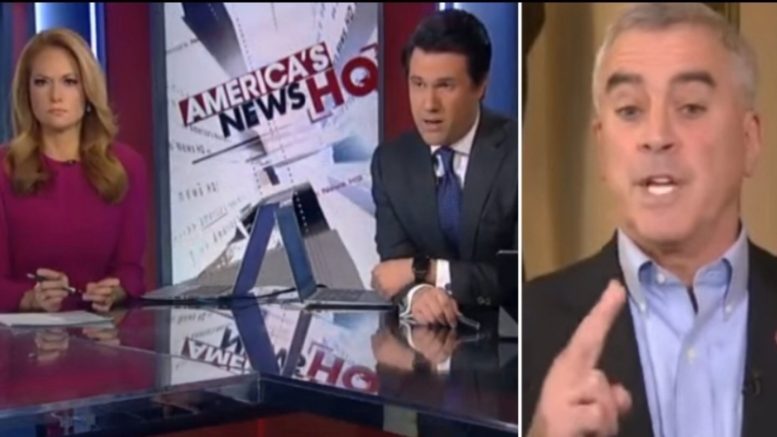 Asked by Jillian Turner if he agrees with President Trump’s decision to “fire” Marie Yovanovitch from her post in Ukraine and if he agrees with the manner in which he did it, Rep. Brad Wenstrup responded, “The first thing I want to say: is that an impeachable offense? Is that what we’re talking about here? [Be]cause isn’t this what this is supposed to be about?”

“First of all, this is an impeachment inquiry and as [Rep] Chris Stewart asked [Yovanovitch] yesterday, ‘Is there a crime here?’… ‘No.'” he continued. “The President has authority. You’re asking me if I agree with how he did it or the fact that he did it. That’s up to the President of the United States. And as [Yovanovitch] said, ‘That is his prerogative.’ And I can tell you that the same thing happened in Poland, because in Warsaw they said, ‘We don’t really think that this Ambassador– that’s a holdover, is in sync with this President’. And they made the change there.”

“Now, whether she’s a victim or not, what the situation seems to be is a lot of that smearing started from Ukrainians. And you know, sometimes like with a baseball team, if the chemistry just isn’t right, they make the change with the manager. Whether it’s the manager’s fault or not,” he added.

Turner interrupted Wenstrup again and said, “Sir, everybody is in agreement it is the President’s prerogative to appoint and dismiss Ambassadors as he chooses. Nobody disagrees with that. What folks on the left are critical of here is the manner in which President Trump had her fired. Do you think regardless of his decision, do you agree? Do you think that the way he handled it was appropriate and was the right way to do it? Do you treat an Ambassador that spent the last three decades serving the nation in various posts overseas?” (Continued Below)

The Ohio Congressman responded, “That’s not up for me to say, to be honest with you, because the President….”

Turner interrupted again and asked,” Why not?” to which Wenstrup responded, “Because I’m not the President of the United States and I’m not the Ambassador. I’m here in Congress and I am having to deal with what rules of engagement are in this world and what the laws are and what procedure is.”

Wenstrup was interrupted yet again, by Leland Vittert who said, “Congressman let’s get to the issue though about what the rules are and you spoke about who was and was not being called to testify. You were alluding, of course, the fact there’s a number of democrats that Republicans want to have testify– Hunter Biden probably being target number one for Republicans. And you’re crying foul on that saying that Hunter Biden should be there. Correct?” (Continued Below)

“I think that is one of the witnesses we would like to hear from and we’re being denied that, yeah,” Wenstrup responded.

“So, the question is: why is wrong for Democrats to deny Hunter Biden being there, but it’s okay for President Trump to keep John Bolton or Mick Mulvaney or a number of other White House officials from testifying?” Vittert asked.

“Well, one of the things that I would say through this process is that isn’t allowed to have any counsel there. They’re not allowed to defend themselves,” Rep. Wenstrup said.

Yet again, Vittert interrupted to say, “That kind of seems like a… wait, hold on. That seems like a non sequitur between Mick Mulvaney or John Bolton isn’t allowed to be there because they don’t have counsel?”

Wenstrup replied, “Well, there’s two things: one is executive privilege, which has always existed,” to which Vittert interrupted to say, “Okay, which the President can wave.” (Continued Below)

“He can wave it or he can keep it in place,” Rep. Wenstrup said. “And we start to damage that, I think that’s gonna be a problem for future Presidents.”

The Ohio Congressman shut down Vittert immediately: “Yes! Because that’s called privilege. It’s an executive privilege. So I think you answered your own question there.” [Emphasized].

“Yes, because it’s called ‘privilege!’ It’s an ‘executive privilege’. So, I think you answered your own question there.” – Wenstrup@realDonaldTrump pic.twitter.com/uC8kxqFJbi