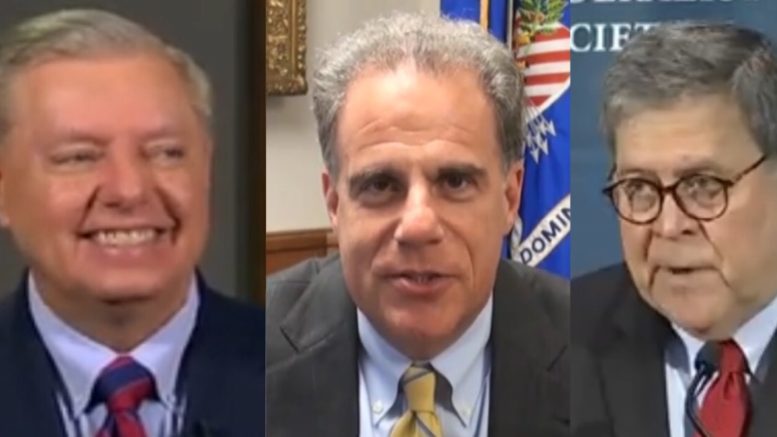 In a press release Monday from the Senate Judiciary, Chairman Lindsey Graham (R-SC) announced that Justice Department Inspector General Michael Horowitz will testify before the Committee on Wednesday, December 11, 2019.

The Inspector General will discuss the findings of his investigation into DOJ and FBI’s conduct during the Foreign Intelligence Surveillance Act (FISA) warrant process as it relates to the 2016 presidential election.

“I appreciate all the hard work by Mr. Horowitz and his team regarding the Carter Page FISA warrant application and the counterintelligence investigation of the Trump campaign.”

“Mr. Horowitz will be appearing before the Senate Judiciary Committee on December 11, where he will deliver a detailed report of what he found regarding his investigation, along with recommendations as to how to make our judicial and investigative systems better.

“I look forward to hearing from him. He is a good man that has served our nation well.”

“It’s been reported and it’s my understanding that it is imminent,” Barr told reporters Wednesday in Memphis, Tennessee. “A number of people who were mentioned in the report are having an opportunity right now to comment on how they’re quoted in the report. And after that process is over, which should be very short, the report will be issued. That’s what the inspector general himself suggests.”

Touting Horowitz as a “fiercely independent” ad “superb” investigator who “conducted this particular investigation in the most professional way,” Barr said he expects his report to be “a credit to the department,” per Washington Examiner. (Continued Below)

Inspector General Horowitz’s investigation was completed in September, and he provided an update to Congress in October, saying a classification review by the Justice Department and the FBI was “nearing completion.”

In August, Horowitz released a report pertaining to former FBI Director James Comey after he “leaked material to the press.” The IG report explains that Comey “violated standard procedures” during his time in the Trump administration; stating he set a “dangerous example” after leaking.

The House has yet to call Horowitz to testify upon the IG’s findings related to Comey.

Graham: “Mr. Horowitz will be appearing before the [Committee] on Dec. 11, where he will deliver a detailed report of what he found regarding his investigation, along with recommendations as to how to make our judicial and investigative systems better."https://t.co/q4dWeTyZNy