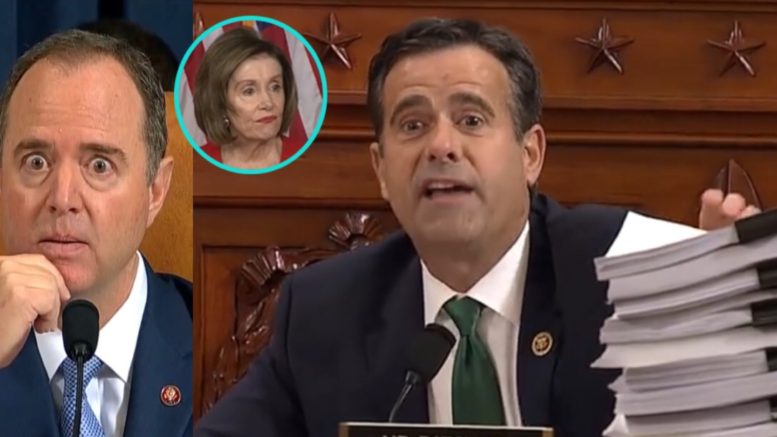 During the Democratic-led impeachment inquiry hearing on Tuesday, with public testimony from Lt. Col. Alexander Vindman, an Army officer who works for the National Security Council, and Jennifer Williams, an aide to Vice President Mike Pence, Congressman John Ratcliffe (R-TX) destroyed Democrats’ latest narrative as he explained that “not a single witness” has described President Donald Trump’s conduct toward Ukraine as “bribery”, even though House Speaker Nancy Pelosi (D-CA) has accused the President otherwise.

Last week, House Speaker Nancy Pelosi accused President Trump of committing “bribery”, along with claiming that the Commander in Chief’s “efforts to cover up his betrayal of his oath of office, almost make the things Nixon did look small.”

“In a press conference last Thursday, Speaker of the House, Nancy Pelosi, said that President Trump committed the impeachable offenses of bribery, evidence in his July 25 call transcript with President Zelensky,” Rep. Ratcliff said. “In concert with that, multiple Democratic members of this committee gave TV and radio interviews over this past week discussing how the President’s conduct supported his impeachment for committing bribery.”

“All of which struck me as very odd,” the Texas Congressman expressed. “Because for the longest time this was all about quid pro quo, according to the whistleblower complaint. But after witness after witness began saying there was no quid pro quo, or even that quid pro quo was not even possible, we saw a shift from the Democrats. They briefly started to refer to the President’s conduct on the July 25th call as ‘extortion’. And now, it’s shifted again last week to ‘bribery’.”

Rep. Ratcliffe explained that he “word searched” through each of the transcripts from the depositions, stacked 10 of the testimonies on to the Dias that have been publicly released, and then, he pointed out that the word “bribery” or “bribed” does not appear “anywhere” in anyone’s testimony. (Continued Below)

“The problem is in an impeachment inquiry that the Speaker of the House says is ‘all about bribery’, where ‘bribery is the impeachable offense’, no witness has used the word bribery to describe President Trump’s conduct. None of them,” Rep. Ratcliffe stated. “Six weeks of interviews in this impeachment inquiry, hundreds of hours of testimony, thousands of questions asked, thousands of answers given. The number of times that witnesses have been asked any question about whether or not President Trump’s conduct constituted ‘bribery’ before Ambassador Yovonovitch was asked by my colleague, Congressman Stewart last Thursday, is zero.” [Emphasis added].

“The number of times witnesses have used the word ‘bribery’ or ‘bribed’ to describe President Trump’s conduct in the last six weeks of this inquiry is zero. In fact, in these 3,500 pages of sworn deposition testimony, in just these 10 transcripts released thus far, the word bribery appears in these 3,500 pages exactly one time. And ironically, it appears not in a description of President Trump’s alleged conduct, it appears in a description of Vice President Biden’s alleged conduct,” the Texas congressman pointed out.

He noted why it’s important: “As early as next week, my Democratic colleagues are gonna say we need to vote on the evidence from this impeachment inquiry– on the impeachment of the President for ‘bribery’, and they’re gonna send a report to the Judiciary Committee. And because there’s more Democrats than Republicans, it’s gonna likely pass. And when that happens, the American people need to be clear that when the Democrats– what they are describing as bribery, not a single witness is describing as ‘bribery’.” (Video Below)

“We’ve heard many times in the course of this proceeding that the facts of the President are not in dispute. But the American people are asking if the facts are same, why do the crimes that the President is being accused of keep changing? Why do we go from quid pro quo to extortion, now to bribery? Chairman Nunes told you the answer. The answer is polling,” Rep. Ratcliffe said.

“The Washington Times asked Americans what would be the most damning accusation. It didn’t come back at quid pro quo, it didn’t come back as extortion. It came back [as] bribery. So, this case is all about bribery. It’s bad enough the Democrats have forbidden White House lawyers from participating in this proceeding. It’s hard enough to defend yourself without your lawyers present. But what’s even worse is trying to defend yourself against an accusation that keeps changing in the middle of the proceeding,” he continued.

“If Democrats accuse the President of high crimes or impeachable offenses, he at least ought to know which one it is. And when Speaker Pelosi says this all about bribery, she’s promised us evidence of bribery that would be compelling and overwhelming, instead, it’s invisible,” the Texas Congressman announced.

(Related: In His Opening Statement, Nunes Slams The Media’s Impeachment Coverage: “Puppets Of The Democratic Party”)