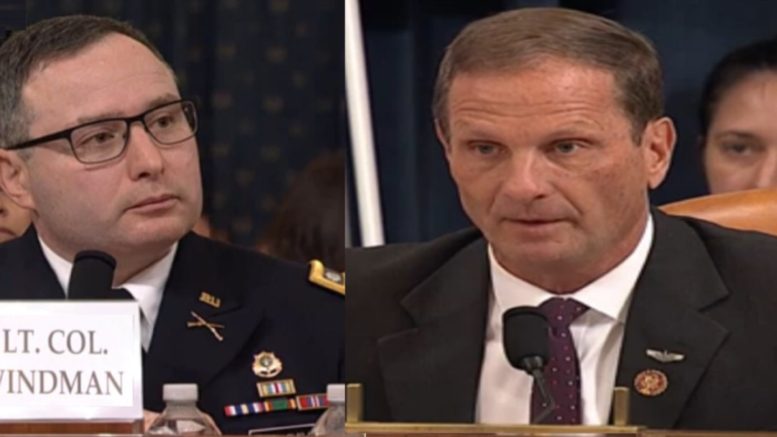 Steward, during his line of questioning, drew attention to Vindman’s assertion that President Trump’s request for Ukraine to investigate his political rivals was “a demand”, but Stewart pointed out “it’s not clear at all”, to assume that.

“I’d like to go back to your previous testimony earlier today, much has been talked about today between President Trump and President Zelensky, and the word ‘favor’. And this is being interpreted as a basis for impeachment. And your interpretation of the word ‘favor’, and I’ll paraphrase you, … ‘In the military culture, … when a superior officer asks for a favor of a subordinate, they will interpret as a ‘demand’. Is that a fair synopsis of what you previously stated?” Rep. Stewart asked Lt. Col. Vindman.

Vindman responded, “Representative, when a superior makes a request, that’s an order.”

“Okay. In short, then, you think your interpretation of a ‘favor’ is a ‘demand’, based on your military experience, in the military culture?” Stewart asked, to which Vindman responded, “I think that is correct.”

“I have to tell you, I think it’s nonsense. Look, I was in the military. I could distinguish between a favor, an order, and a demand. And so could my subordinates. And I think President Zelensky did as well. He never initiated an investigation. In fact, he’s been very clear. He said, ‘I never felt any pressure at all’. So you interpreted the word ‘favor’, but the two people who were speaking to each other did not interpret that as a ‘demand’. It was your interpretation. Is that fair?” Rep. Stewart asked. (Continued Below)

“The context of this call, consistent with the July 10th meeting, with the reporting that was going on, including the President’s personal attorney, made it clear that this was not simply a request,” Vindman claimed.

The Utah Congressman went on to quote part of Vindman’s previous testimony and his reaction to the phone call. “Quoting you, Lt. Col. Vindman– ‘I did not know whether this was a crime or anything of that nature. I thought it was wrong. … In my mind, did I consider this facture there could’ve been other implications, yes? But it wasn’t the basis of I don’t know, lodging a criminal complaint or anything like that,'” he said.

“Then you go on to talk about policy concerns and moral and ethical judgments. So your concerns regarding this phone call were not legal. They were based on moral, ethical, and policy differences. Let me ask you then, … there are dozens of corrupt nations in the world,” Stewart added. (Video Below)

“Hundreds of corrupt government officials –exactly one time, did a vice president go to a nation and demand the specific firing of one individual and give a six-hour time limit– withhold or threaten a billion dollars in aid– if not, it was the one individual who was investigating a company that was paying his son. So, I’ll ask you: was that also wrong?” Rep. Stewart asked.

Vindman apparently did not know how to answer the question presented about Joe Biden.