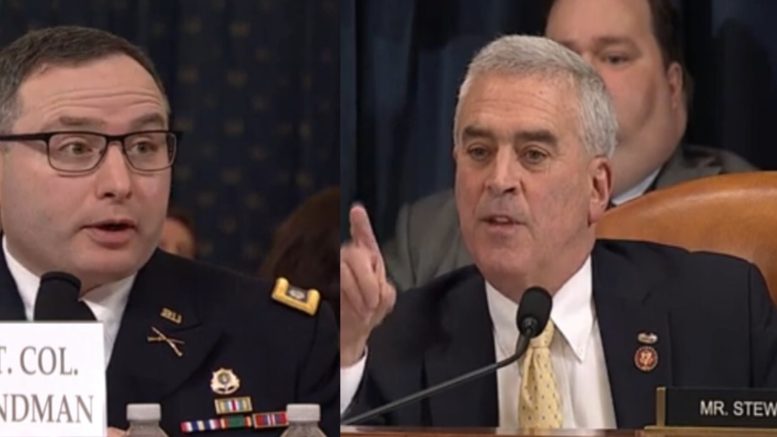 During his line of questioning, Rep. Wenstrup questioned the steps Vindman took to report his concerns about the July phone call between President Trump and Ukranian President Zelensky and caught Vindman in a lie.

“In your deposition, you emphasized the importance of ‘chain of command’. You were to directly report to Dr. Fiona Hill and then Mr. Tim Morrison and they were your seniors. Correct?” Rep. Wenstrup asked Lt. Col. Vindman, to which he answered, “That is correct.”

“When you had concerns about the [July 25] call between the President’s, you didn’t go to Mr. Morrison about that, did you?” Wenstrup asked, to which Vindman said that he went to John Eisenberg.

The Ohio congressman explained that in former NSC official, Tim Morrison’s deposition, on page 58-60, he revealed that Morrison learned of Vindman’s concerns through open-source reporting. “Lt. Col. Vindman’s direct report is with Mr. Morrison, and it didn’t happen,” Wenstrup said.

Wenstrup went on to read part of Vindman’s deposition. On page 96, it shows Vindman was asked if he had any discussions with Tim Morrison about his concerns. Vindman said in his deposition, after the call, he immediately went to the senior NSC legal counsel and shared his concerns to Mr. Eisenberg, instead of Morrison. (Continued Below)

“You’re not a JAG officer, you’re not a lawyer, and on page 153 of your testimony deposition, in reference to that meeting with Mr. Eisenberg, I was not making a legal judgment. All I was doing was sharing my concerns with my chain of command. Yet, we’ve established that your direct report to Mr. Morrison,” Rep. Wenstrup said.

“So let’s establish your role and your title: in your deposition Lt. Col. Vindman, page 200-201, you said, ‘I would say, first of all, I’m the Director for Ukraine. I’m responsible for Ukraine. I’m the most knowledgable and for the National Security Council in the White House.’ Are you the only one in the entire universe of our government or otherwise that can advise the President on Ukraine? Couldn’t someone like [Jennifer] Williams also advise on Ukraine, it’s in her portfolio?” Wenstrup asked.

Vindman responded, “That’s not typically what would happen. It would be Ambassador Bolton,” to which Wenstrup fired back, “So, other people can advise on Ukraine, besides you!” (Continued Below)

“Mr. Morrison is your senior,” the Ohio Congressman declared. “He didn’t know about it. How can he decide an action to take? But that’s what you said. In Mr. Morrison’s deposition, page 60, the question is: ‘What point did you learn that Lt. Col. Vindman went to Eisenberg?’ He said ‘about the 25 phone call.. in reviewing an open record.’ … ‘So Eisenberg never came to [Morrison] to relay the conversation, [which Morrison] said no’. … So Mr. Morrison was skipped in the chain of command about your other concerns.”

“So Mr. Morrison is the final clearing authority. He said ‘he saw your edits.’ Do you remember if all of the edits were incorporated, he said ‘yes, I accepted all of them.’ That’s on page[s] 61-62. He believes all your edits were excepted,” Wenstrup said.

“Let me ask you, were you, in your edits– did you insist that the word ‘demand’ be put into the transcript between the conversations of the two presidents?” Wenstrup asked Vindman, to which he answered, “I did not.” (Video Below)