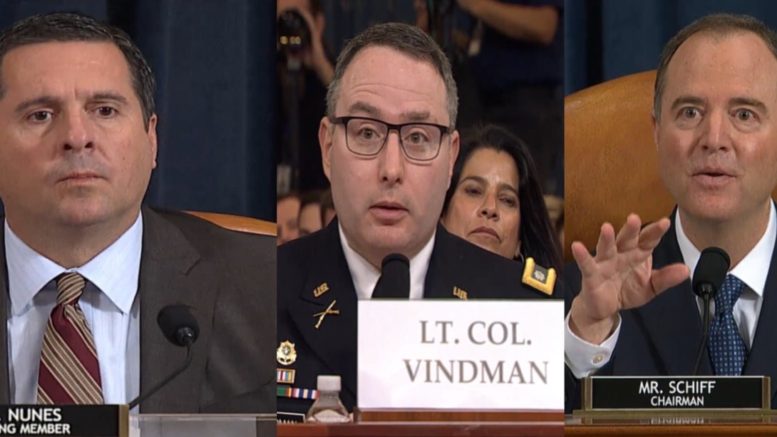 During his line of questioning, however, House Intelligence Chairman, Adam Schiff (D-CA) interrupted Nunes after Vindman admitted that he gave out information about the call to people “outside of the White House.”

“Lt. Col. Vindman, did you discuss the July 25th phone call with anyone outside the White House on July 25 or July 26? And if so, with whom?” Rep. Nunes asked.

“Yes, I did. My core function is to coordinate U.S. government policy, interagency policy and I spoke to two individuals with regards to providing some sort of readout of the call,” Vindman answered.

“And what agencies were these officials with?” Nunes asked, to which Vindman replied, “Department of State, Deputy assistant secretary George Kent, who is responsible for the portfolio– eastern Europe, including Ukraine. And [an] individual ‘in the intelligence community.'” (Continued Below)

“As you know the intelligence community has 17 different agencies; what agency was this individual from?” Nunes asked.

Nunes reclaimed his time and asked, “You testified in your deposition that you did not know the whistleblower, to which Vindman responded, “Ranking member, it’s Lt. Col. Vindman, please.” (Continued Below)

Nunes repeated the question and addressed Lt. Col. Vindman as asked, to which Vindman said he does not know who the whistleblower is.

“How is it possible for you to name these people and then out the whistleblower?” Nunes asked.

“Per the advice of my counsel, I’ve been advised not to answer specific questions about members of the intelligence community,” Vindman claimed.

Nunes then asked, “Are you aware that this is the Intelligence Committee that’s conducting an impeachment hearing?”, to which Vindman replied, “Of course, I am.”

Lt. Col. Vindman’s council interjected to say, “On behalf of my client, we are here following the rules of the committee, rule of the chair, with regard to this issue. And this does not call for an answer that is invoking the fifth or any theoretical issue like that. We’re following the ruling of the chair.”

“What ruling is that?” Nunes asked, to which Schiff interjected again to say, “The council is correct. The whistleblower has the statutory right to anonymity used to out the whistleblower.”

“Well we’ve attempted to subpoena the whistleblower to sit for a deposition, the chair has tabled that motion and unwilling to recognize those motions over the last few days of this impeachment inquisition process,” Nunes explained.

Last month, former Fox News’ Chief Intelligence correspondent, Catherine Herridge, however, pointed out last month the law Lt. Col. Vindman may have violated with his post-Ukraine phone call actions, according to his opening statement of his deposition that was conducted behind closed doors. (Video Below)

“One thing that caught my attention is that Vindman said he shared it with people who were relevant and had sort of a ‘need to know’ and ‘proper security clearances,’” Herridge said. “The reason that matters is that presidential phone calls are ‘highly classified’, and if they’re shared with people who don’t have a ‘need to know’, that would be a potential violation of the ‘leaking statute’, which is 18 U.S.C. 798”. (18 U.S.C. 798: Disclosure of classified information)

(Related: In His Opening Statement, Nunes Slams The Media’s Impeachment Coverage: “Puppets Of The Democratic Party”)