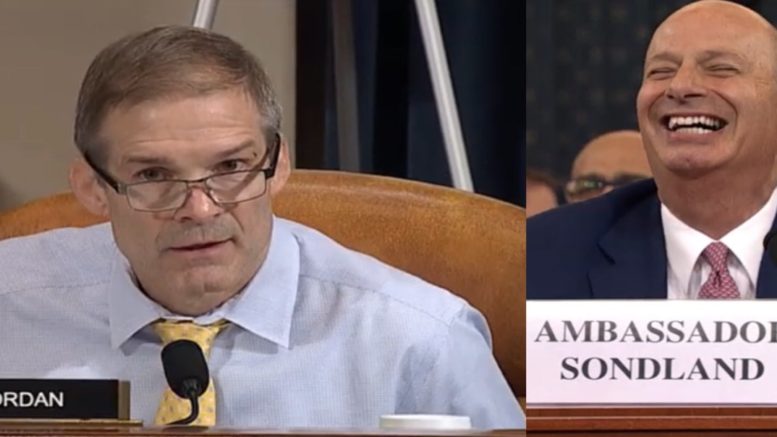 Rep. Jim Jordan (R-OH) hammered Ambassador Gordon Sondland on Wednesday during a House Intel Committee hearing pertaining to Democrats’ impeachment inquiry against President Donald Trump. The focus was on Sondland’s omission that he made in his opening statement, in that he asserted there was a “quid pro quo”.

“Ambassador, when did it happen?” Rep. Jordan point-blank asked Ambassador Sondland, to which Sondland asked: “When did what happen?”

“The announcement!” Rep. Jordan declared. “When did President Zelensky announce that the investigation was gonna happen? … You said this, [when asked] ‘Was there a quid pro quo?’ Today in your opening statement, ‘As I testified previously, with regard to a requested White House call, White House meeting, the answer is yes– that there needed to be a public statement from President Zelensky.”

“When the chairman asks you about the security assistance dollars, there needed to be a public announcement from Zelensky. So, I’m asking you a simple question: when did that happen?” Jordan inquired, to which Sondland replied, “It never did.”

“You don’t know who was in the meeting?” Jordan then asked. Sondland said, “Which meeting are you referring to?” to which Jordan declared, “The meeting that never happened! Who was in it?” Sondland then burst into laughter. (Continued Below)

“You know how Zelensky announced it? Did he tweet it? Did he do a press statement? Did he do a press conference? You know how that happened? I mean you got all three of them wrong. They get the call, they get the meeting, they get the money. It’s not 2+2, it’s 0 for 3. I mean, I’ve never seen anything like this. And you told Mr. Castor, that the President told you that the President never told you the announcement never had to happen to get anything. He didn’t not just tell you that, he explicitly said the opposite,” Jordan explained.

“You said to the President of the United States, ‘What do you want from Ukraine?’ The President [said] ‘I want nothing. I want no quid pro quo. I want Zelensky to do the right thing. I want him to do what he ran on’. What did he run on Mr. Ambassador Sondland?” Jordan asked, which Sondland replied, “Transparency.”

“And dealing with corruption, right?” he asked, to which Sondland replied, “That’s right.” (Continued Below)

Then, Jordan asked why Sondland didn’t include his conversation with the President in his opening statement.

“I think you said you couldn’t fit it in. Is that right? We might be here for 46 minutes, instead of 45. The most important statement about the subject matter at hand– the President of the United States had a direct conversation with you about the issue at hand and the President said… let me read it one more time,” the Ohio Congressman said.

“‘What do you want from Ukraine Mr. President? I want nothing. I want no quid pro quo. I want this new guy, this brand new guy in politics, his party just took over. I want Zelensky to do the right thing. I want him to run on and do what he ran on’, which is corruption. And you can’t find time to fit that in a 23-page opening statement,” Jordan expressed. (Video Below)

(Related: Before Grilling Sondland, Nunes Exposes What Schiff’s “Bathroom Break” Was Really About: “That Was Dems [Holding] A Press Conference”)