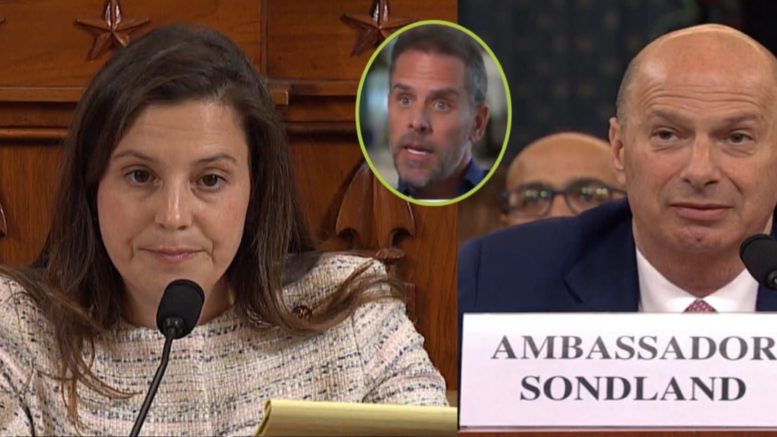 Rep. Elise Stefanik (R-NY) questioned Gordon Sondland, the U.S. ambassador to the European Union, on Wednesday, during a public hearing in the House Intel Committee as part of the Democratic-led impeachment inquiry against President Donald Trump.

While grilling Sondland, Stefanik made the case for why former Vice President Joe Biden’s son, Hunter Biden, should come forward and testify before the committee.

Hunter Biden served on the board of Burisma from 2014 to 2019. His father was in office from 2008 to 2016. In 2016, Joe Biden threatened to withhold $1 billion from Ukraine unless the country ousted prosecutor Viktor Shokin, who was probing Burisma. The case was closed by Shokin’s replacement, Yuriy Lutsenko, as reported by The Epoch Times.

“The Obama administration State Department was concerned about the potential appearance of ‘conflict of interest’ with Hunter Biden in serving on the board of Burisma because they raised this as they were preparing Ambassador Yovonovitch for her Senate confirmation. Are you aware of that?” Rep. Stefanik asked Sondland, to which he replied, “I am not aware of that.”

“She testified when I asked her that question, both in the open hearing and the closed deposition. And I’ve asked most of our witnesses this and every witness I’ve asked has said, ‘yes,’ and I want to ask you this today,” she continued. (Continued Below)

“Do you believe that Hunter Biden having a position on the board of Burisma has the ‘potential appearance of a conflict of interest?’” Rep. Stefanik asked.

“I don’t want to characterize Hunter Biden’s service on the board one way or another, I just don’t know enough,” Sondland said.

“So you disagree with every other witness who has testified ‘yes, there is a potential appearance of conflict of interest?’” Stefanik asked. (Continued Below)

“Correct. Clearly, this is something that every witness has answered yes to or agreed with it could have a potential appearance, and yet we are not allowed to call Hunter Biden to answer questions in front of this committee,” Stefanik said.

Republicans have asked House Intelligence Chairman Adam Schiff (D-CA) to schedule Hunter Biden to testify but so far the Chairman has refused. Ranking Member Devin Nunes (R-CA) announced during his opening statement Wednesday that the GOP submitted subpoena requests to Schiff for Hunter Biden and the whistleblower.

(Related: While Being Grilled, Kent Admits He Expressed Concern On A “Conflict Of Interest” Involving the Bidens)