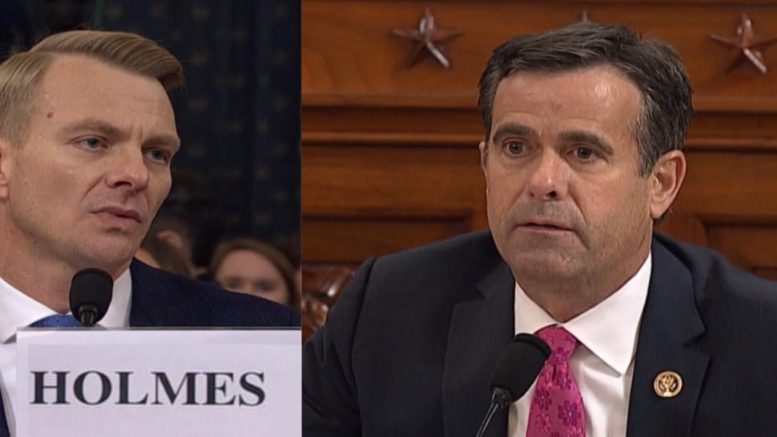 Homles claimed that he “overheard a conversation between President Trump and Gordon Sondland”, the U.S. ambassador to the European Union, in which Trump reportedly asked about the “investigations”.

“I want to turn to the part of the conversation of your testimony where you said you heard President Trump say, ‘Is he gonna do the investigations?’ And Ambassador Sondland said, ‘He’s gonna do it. He’ll do anything you ask him to.’ Is that right?” Rep. Ratcliffe asked of Holmes, to which Holmes said, “Yes, sir.”

“What did President Trump say next?” the Texas Congressman asked.

“Sir, it’s not a word for word, every single word in the conversation,” Holmes replied.

Rep. Ratcliffe then announced, “But it’s the most important part of the conversation. Respectfully, Mr. Holmes, this impeachment inquiry is based on the call, where the day before, President Trump is part of a bribery scheme, is part of an extortion scheme, part of a quid pro quo, according to the Democrats– demanded investigations in exchange for either military aid or a White House meeting. And the next day, you were [a] witness to President Trump receiving word that the bribery scheme was successful, the extortion scheme was successful.” [Emphasized]

“And his response was, ‘Good, what about Sweden?'” Ratcliffe noted. (Video Below)

“What was the first thing the President said on the call?” the Texas Congressman then asked.

Holmes hesitated to answer then replied, “Sondland greeted the President”, … He said, ‘Hello, Mr. President, I’m in Ukraine.'” (Continued Below)

Ratcliffe grilled Holmes on other topics pertaining to the phone call, seemingly to see if he was telling the truth and what appeared to be Ratcliffe wondering why Holmes only heard a specific part of the conversation.

“How did the conversation end?” Ratcliffe then asked, to which Holmes said that he only heard Ambassador Sondland’s side of the story. “[Sondland] was giving the President advice on how to deal with his A$AP Rocky situation and he said, ‘They should have released him on your word and you can tell the Kardashians you tried.'” Holmes said.

“I want to make sure the record is clear that yesterday Ambassador Sondland testified that the topic of conversation did not come up, on that day,” Ratcliffe declared.

(Related: David Holmes Puts His Irritation With Jordan’s Line Of Questioning On Full Display: “We Already Had The Transcript”