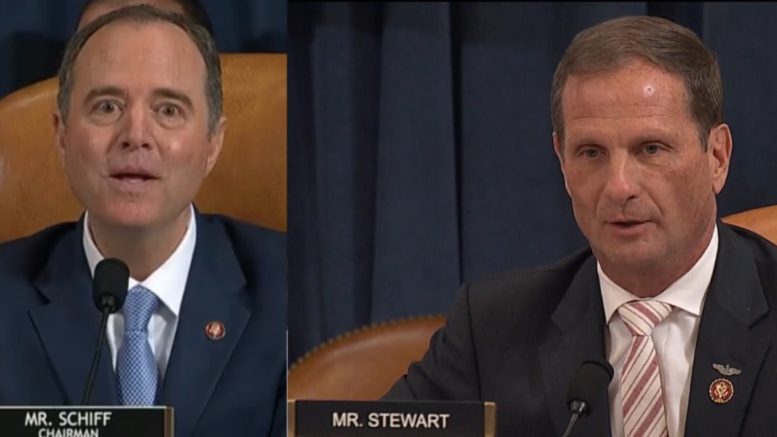 During the public Democratic-led impeachment inquiry hearing on Thursday, Rep. Chris Stewart (R-UT), urged the Senate to call several witnesses in the impeachment probe that did not testify in House hearings to “get to the truth”.

The Senate is expected to take up an inquiry “if” the House of Representatives votes to impeach President Trump.

“This ‘Impeacha-palooza tour’ finally comes to an end,” Rep. Stewart expressed. “A year of resistance, two and a half years of these absurd accusations against the President and of Russian collusion. We’ve gone from quid pro quo to bribery to extortion. Seven weeks of hearings, sixteen secret closed-door sessions, twelve public hearings, … hundreds of hours of testimony.”

“And I really think, for those that hate the President, they haven’t changed their minds,” he continued. “But there’s a lot of Americans that look at this and they think ‘Is that it? Really? You’re going to impeach and remove a President for this?'”

“Now, like I said, if you don’t like the President, you’ve already come to that conclusion, may people wanted this three years ago. But for a lot of Americans, they really look at that, and they can see this, no evidence, zero evidence of any bribery. Zero evidence of extortion, zero evidence first hand of any quid pro quo, and yet, impeachment is almost inevitable,” the Utah congressman explained. “And why? Because the leadership of this committee has been unfair and dishonest.”

Rep. Stewart slammed House Speaker Pelosi (D-CA) for comments she’s previously claimed to the press pertaining to impeachment: “And I know we hear these crocodile tears from some of my colleagues who are ‘heartbroken’ because they finally have to impeach this President. And we know that’s absurd, there’s no heartbroken, there’s no ‘prayer tears’ over this. They’re giddy over this, and there’s not a person in this country who doesn’t know that,” he said. (Continued Below)

The Utah Congressman said everyone knows what Democrats are going to do next: impeach the President and send it on to the Senate, adding, “That is the good news, that’s good news!”

“You know, we’ve all been to a concert. You’ve got the warm-up band and then you got the main act. And what we’ve seen here is the warm-up band. This is kind of like The Sioux City Crooners. This is a band that no one has ever heard of. But the warm-up band is over and now, we’re gonna go on to the main event, and that’s the U.S. Senate,” he pointed out.

“In the U.S. Senate, there won’t be any secret testimony. There’s not gonna be dishonest leadership or a chairman who refuses to let us ask appropriate questions, or to deny a defense. Where in the world, where in the country do you have a trial where the prosecution presents their case and the defense isn’t able to? Rep. Stewart asked. “So we’ll finally be able to get to the truth.” (Continued Below)

Rep. Stewart turned his attention to his colleagues in the Senate and suggested witnesses they “need to call and some questions they need to ask.”

“First, you have to hear from the whistleblower,” he suggested. “They can choose to do that behind closed session if they want to. I leave that up to them, but you can’t initiate an impeachment of the President of the United States and not have to answer some questions.

I think our own chairmen needs to be called, Rep. Stewart urged.

“The American people expect a lot in politics. They understand the tussle, the fight, the debate. But they also expect basic fairness. And these proceedings have been anything but fair. The Senate has an opportunity to fix that. I am confident they will, and I look forward to them completing the job that we could’ve done here,” Rep. Stewart concluded.

(Related: Ratcliffe Catches Holmes Excluding The “Most Important Part” Of His Account From His Statement)