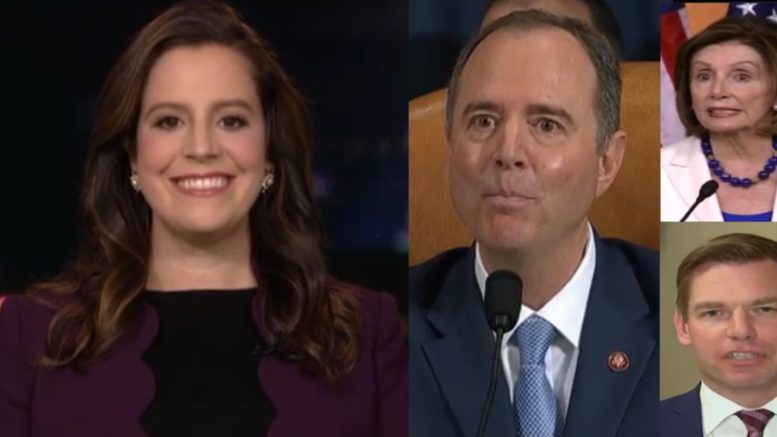 Stefanik explained that she focused on the “facts” during the impeachment inquiry hearings, which were held in the House Intelligence Committee, and indicated why Democrats’ case for impeachment is now “crumbling”.

“It is clear as every day goes by that Democrats case for impeachment is crumbling. Adam Schiff has been an abject failure,” the New York Congresswoman told Hannity.

“Ukraine got the aid, there was no quid pro quo, and there was no investigation into the Bidens. In fact, the only investigations into Burisma was under the Obama administration. But yet, Adam Schiff continues his regime of secrecy,” Rep. Elise stated.

She also said that because she’s been an “advocacy for the facts”, she has been attacked and pointed to the “Hollywood left”, who have put their support behind her “far-left Democratic opponent”, Tedra Cobb, with millions of dollars.

Hannity noted that Stefanik had a “famous” exchange with the “congenital liar”, who was running the “Schiff show”, adding, “It was interesting because you were calling for fundamental fairness. Republicans have asked for witnesses to come forward, they have not been granted from that from on ‘up high Schiff mountain,'” he said. (Continued Below)

“That’s correct,” Rep. Stefanik said. “And that’s how unfair this process has been. I was the first member of Congress to ask the question: ‘When did Adam Schiff talk to the whistleblower?’ And I was ridiculed by the mainstream media. But it turns out, that it is clear, there was coordination between the whistleblower and Adam Schiff’s Democratic staff.”

(Related: When Grilling Sondland, Stefanik Makes The Case For Why Hunter Biden Should Testify: “Every Witness Has Answered Yes,” There Is A Potential Conflict Of Interest)

“And the one witness that Adam Schiff won’t call is the whistleblower, who started of this entire impeachment process. In addition, Adam Schiff refuses to call Hunter Biden. And every single witness that was asked if there was a ‘potential appearance of a conflict of interest’, they answered yes,” she added. (Video Below)

“Despite this incredibly unfair process, Republicans control the Senate. And I’m hopeful they will run a fair process– call Adam Schiff, call the whistleblower, and call Hunter Biden to actually get to the facts and really focus on the corruption,” Rep. Stefanik urged.