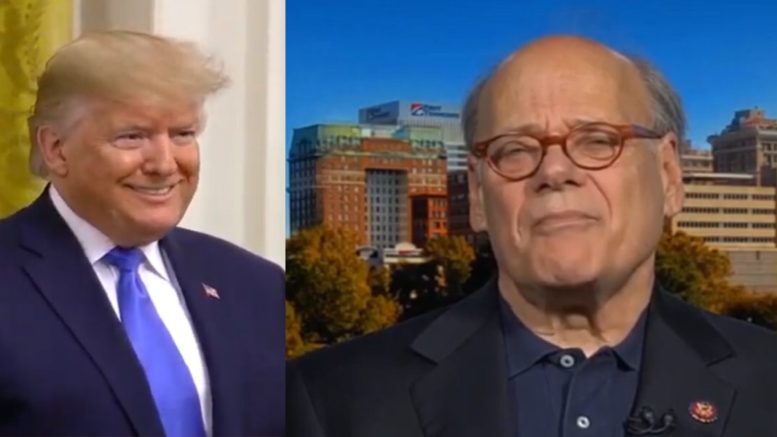 Rep. Steve Cohen (D-TN) spoke with MSNBC’s Stephanie Ruhle Friday where he claimed President Trump does not have the power to decide if Democrats’ impeachment inquiry is legitimate or not.

He further accused Republicans of having a “cult” loyalty to President Trump and asserted it is “authoritarianism happening”.

“He should not be able to decide or take action, based on his opinion that it’s not a lawful impeachment. For him to not send testimony, officials to testify, documents that have been subpoenaed to the committee, … is contempt of Congress. He doesn’t have that right,” Cohen continued.

“Only in a totalitarian government, only in a dictatorship, an authoritarian government does the king or the absolute ruler, be able to say, ‘No, this will not happen.’ We have equal and separate branches of government, and the Article 1 powers of Congress, include impeachment to see to it that the President does not get out of line,” Cohen added.

Executive privilege gives the president the ability to withhold information from the public, Congress, and the courts in national security and diplomatic affairs. George Washington first claimed privilege when Congress requested to see Chief Justice John Jay’s notes from an unpopular treaty negotiation with Great Britain. While not enshrined in the Constitution, Washington’s action created the precedent for privilege, according to Wikipedia. [Emphasis added]. (Continued Below)

Rep. Cohen also accused Republicans of having a “cult” loyalty to President Trump, which he said is allowing “authoritarianism”.

“There may be one Republican House member who might vote to impeach and a couple of senators who are in danger, the McSally’s, the Tillis’s– they’re on hot seats, possibly even Joni Ernst. But it could have influenced them, but the reality is most of them have bought that it’s the Trump party,” Cohen claimed.

“They’re no longer the party of the Dwight Eisenhower or even Ronald Reagan and certainly not the Bushes,” he continued. “They are totally attached to Trump and will do whatever they can to support him. And when they do things not for the basis or the benefit of their country or even their party but of an individual, a cult figure who has taken over their party, that’s scary to America, because that’s authoritarianism happening.” (Video Below)

(Related: Cohen Declares He’s Already Made Up His Mind On Impeachment Despite Not Seeing All Evidence)