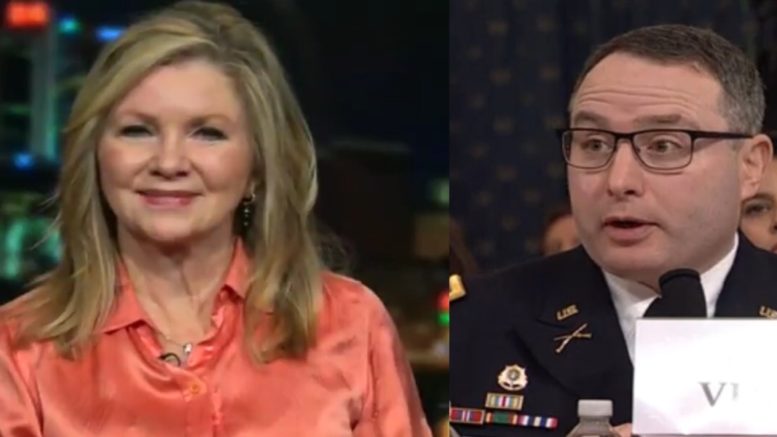 Senator Marsha Blackburn (R-TN) spoke with host Shannan Bream on Fox News Friday where she defended why she criticized Lt. Col. Alexander Vindman in a tweet.

“Vindictive Vindman is the ‘whistleblower’s’ handler,” Blackburn tweeted on Friday.

Senator Marsha Blackburn doubled down on her criticism toward Lt. Col. Vindman, despite receiving criticism herself for the post she made on Twitter.

Asked by Shannon Bream if she stands by her tweet, Sen. Blackburn responded, “I do stand by the tweet.”

“The President wasn’t taking his advice; he didn’t like that. He wanted the President to take his advice. And so, what did he do? He defied that chain of command, he talked to somebody in the Intel community,” Senator Blackburn said. (Continued Below)

Senator Blackburn explained that during Vindman’s testimony, he wouldn’t disclose who he gave his information to.

“He then, would not answer that question when he was asked if he had given this information to someone who was the whistleblower. And of course, this is something that should cause everybody concern,” she said.

“Look, you honor someone for their service to the country, and certainly, we honor the service that he gave to the country, but Shannon, I gotta tell you, when you are defying your chain of command, when your direct supervisor says you have a problem with judgment and a problem with defying that chain of command– and you are going after not just a colleague– you are going after the Commander in Chief. And it is over a policy disagreement,” Senator Blackburn stated. (Video Below)

“And look where we find ourselves– here with this whistleblower report and with this impeachment, and this is going on in every has said there is nothing that rises to the level of impeachment or bribery or extortion. The American people are tired of this. And they want to get the facts, they want to get this over with, the Tennessee Senator added.

Vindictive Vindman is the “whistleblower’s” handler.

For 3 years the Democrats have been lobbing accusations against @POTUS, spying on citizens by the FBI.

How could this happen in the USA? pic.twitter.com/gXgwC6XErf

(Related: While Being Grilled By Jordan, Vindman Fails Naming All Individuals He Spoke With Once Dems Step In)