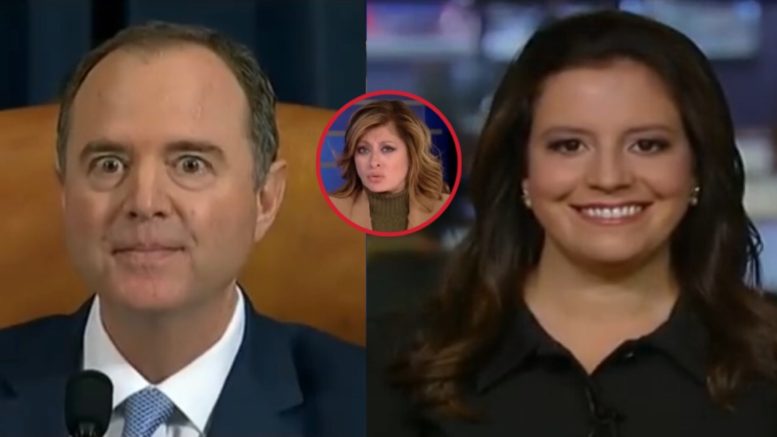 Rep. Elise Stefanik took on Chairman Adam Schiff during the public hearings told Bartiromo during her interview: “The American people could see first-hand how partisan this process has been from the start. Adam Schiff, these rules that we conducted and were totally unprecedented– members were not able to yield time to others members, which we’re allowed to do on the House floor, which we’re allowed to do in any other committee, except under Adam Schiff’s regime of secrecy.”

“So the American public, they have outpoured support for me. They want to hear from members of Congress and I’m proud to have asked some of the best questions of the impeachment proceedings. And Adam Schiff will continue to silence Republican members, who he does not want to hear from, because he does not want to hear the truth. And the American people are interested in hearing the truth about this important matter,” the New York congresswoman explained. [Emphasis added].

“That means there was coordination ahead of time and I also highlighted that Adam Schiff was adamant about hearing from the whistleblower until it came out for the public to know that he had coordinated ahead of time. The American people are smart enough to know this has been partisan and now all of a sudden, Adam Schiff wants to refuse to hear from the whistleblower,” she said.

“We need to hear from the whistleblower. He needs to be one of our witnesses,” Rep. Stefanik insisted. “Of course, he should be protected from retaliation or firing, but this is what started off this entire impeachment process, which has taken up two months of work on the intelligence committee.” (Continued Below)

Two weeks ago, Senator Lindsey Graham told Bartiromo in an interview that “impeachment is invalid” until we know whistleblower’s identity.

“It’s impossible to bring this case forward, in my view, fairly, without us knowing who the whistleblower is and having a chance to cross-examine them about any biases they may have. So, if they don’t call the whistleblower in the House, this thing is ‘dead on arrival’ in the Senate,” Senator Graham warned. [Emphasized.]

Rep. Stefanik believes the proceedings conducted by the House Intel Chairman turned out to be “very confusing for the American public” emphasizing that there are “no impeachable offenses”. (Continued Below)

“Every single day that the American people tune in, they see that this a partisan process, a complete waste of energy. There is so much important work that we should be doing in Congress. When the Intelligence Committee finalizes their report, I anticipate this will go to the Judiciary Committee. We are likely to have more public hearings in the Judiciary Committee, and then, ultimately there will have to be a vote on the House floor. Based upon Speaker Pelosi, she has said she thinks that may happen before the end of the year. And then, it would go to the Senate,” Rep. Elise explained.

Asked if she thinks it is realistic that Schiff would testify under oath in the Senate, Rep. Stefanik replied, “Adam Schiff should answer questions under oath. He has functioned as the judge, jury, and chief prosecutor. He also functioned as the counsel to the witnesses, giving advice to the witnesses when they should and should not answer questions. And as these hearings exploded into the public, Americans were able to see that and understand this has been a partisan process from the start.”

(Related: Rep Stefanik Indicates Why “Dems Case For Impeachment Is Crumbling”: “Ukraine Got The Aid, No Quid Pro Quo & No Investigation Into The Bidens”)