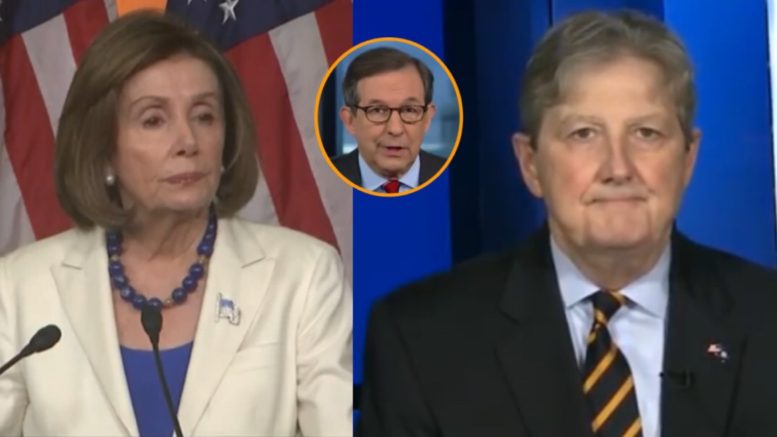 “Here’s what I see: I think that Speaker Pelosi is acting in a manner that is insincere, even by the standards of Congress,” Senator Kennedy said. “I think she is turning impeachment into a ‘routine political weapon’. I think nobody is above the law, but nobody is beneath it. And I find it unconscionable that they have not allowed the President to defend himself on the House side.”

Kennedy clarified by criticizing House Intelligence Committee Chairman Adam Schiff’s move to block Republicans from calling witnesses in the impeachment inquiry and “not allowing the President to defend himself.”

“In terms of the substance, I think the quid pro quo is a red herring,” he said. “I think there are only two issues in this case: number one, according to Speaker Pelosi, President Trump asked for an investigation a political rival. There’s another scenario, and that is President Trump asked for an investigation of ‘possible corruption’ by someone who happens to be a political rival. The latter would be if proven, would be in the national interest. The former would be in his parochial personal interest.”

Senator Kennedy also said he’s raised his point of view of the analysis with the media, to which they have responded, “Well, there’s no evidence of any impropriety by Hunter Biden”. Kennedy said his response to the media is, “The absence of evidence is not necessarily evidence of absence if you don’t look,” noting that Speaker Pelosi has not allowed the defense to offer rebuttable evidence in terms of the possible corruption that the President was looking into. (Continued Below)

Chris Wallace asked Kennedy: “Doesn’t it seem like [Trump] was trying to get political dirt on a rival and if so, do you think that’s a serious act on his part Is that a crime?”

“In my opinion, and if I were back teaching in law school, this is the way I would teach this case– doesn’t mean I’m right, but this is the way I see it. There are only two questions that have to be answered here. Why did the President ask for an investigation? And number two: this is inextricably linked to the first question, what did Hunter Biden do for the money?” he asked.

“Now, you answer both of the questions and you can resolve this case fairly. … The quid pro quo, I think, is a red herring. Quid pro quo tells you nothing, Chris. What matters is whether it was an illegal quid pro quo, which leads you right into what I think is the correct analysis, which is what I just gave you,” Senator Kennedy explained. (Continued Below)

Last week, Senator Lindsey Graham sent a letter to Secretary of State Mike Pompeo requesting documents to aid in determining whether Biden pushed for the firing of Ukrainian Prosecutor General Viktor Shokin to squash a sweeping probe into Burisma Holdings, the Ukrainian energy giant where his son, Hunter Biden, served as a board member.

In Graham’s letter, he requested all documents and communications, including call transcripts or summaries, related to the Vice President’s phone calls with President Poroshenko on February 11, 18, and 19 and March 22 of 2016, especially with respect to whether Vice President Biden mentioned the Prosecutor General’s investigation into Burisma.

All documents and communications between the Vice President and his office and President Poroshenko and his office after the raid on Mr. Zlochevsky’s home on February 2, 2016, until the dismissal of the Prosecutor General on March 29, 2016. And, all documents and communications related to a meeting between Devon Archer, a business partner of Hunter Biden, and Secretary of State John Kerry on March 2, 2016. (Video Below)

Sen. John Kennedy’s interview with Chris Wallace; remarks on impeachment start at 3:20 into the video: