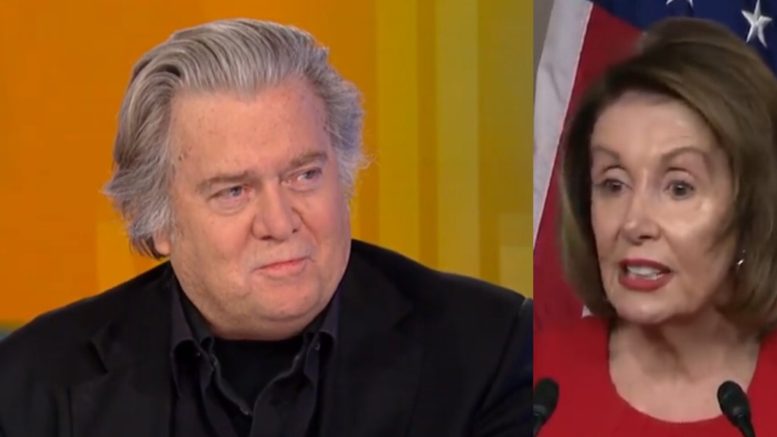 Bannon believes that House Speaker Nancy Pelosi (D-CA) is “risking her speakership by continuing to press on with impeachment.”

“I think that Adam Schiff did the President a great service this week by having these hearings and letting people see what’s going on and now, you’re seeing in these 31 districts, many of these congressmen have to go home and have to defend this– it’s going to be a tough week for Democrats,” Steve Bannon said.

In 2016, Donald Trump won 31 districts where congressional Democrats are running for re-election and are possibly vulnerable to losing their seats if they vote to impeach the President. 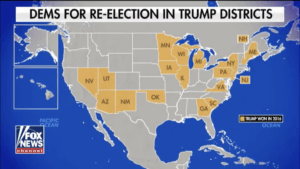 “These are why these [districts] are important,” Bannan explained. “Obama won these districts twice, Trump won these in 16′. The Democrats didn’t [win] them in 18′. And Nancy Pelosi kind of handpicked these candidates. … These are kind of handpicked, either veterans, people that worked at the CIA, handpicked candidates. When they ran, Nancy Pelosi and the Democrats said, ‘Never mention impeachment’– talk about healthcare, talk about jobs, talk about national security. And now, they’re put into a quandary.” (Continued Below)

“Those 31 [districts] are really where this impeachment [weighs]– And I think Nancy Pelosi is risking now her speakership by continuing to press on and even trying to have an impeachment vote, which looked inevitable. And still, they’re so invested in this– Adam Schiff, Nancy Pelosi, and particularly the media. Inside the beltway, Democrats and the media are so invested. But, she’s gonna risk her speakership,” Bannan predicted. [Emphasized].

“These Democrats, who are absolutely essential to have independents vote for them– because these are districts that President Trump won, they are now in a quandary. I think that many of them believe that if they actually vote for the articles of impeachment later in December, they believe they could be signing their ‘political death warrant’. And so, that is why these 31 [districts] are so critical,” Bannan said.

“I think right now you’re gonna see a lot of second-guessing and a lot of back budding among the Democrats as President Trump continues to say, ‘I want more substance.’ And one of the things they’re looking at is a potential Senate trial– where on this show 3 weeks ago, I said not just Hunter Biden, but Joe Biden has to go before the nation and make the case why he’s not above the law,” he explained. (Continued Below)

“Why did [Biden] try to bring American crony capitalism into the most corrupt nation in Europe and the third most corrupt nation in the world? And I think as these Democrats sit there in these 31 districts and say ‘Hey if more details come out on Trump’s side and now Trump’s on offense, it’s only gonna make our job tougher,'” Bannon noted.

“Let’s go back to unity and substance; you’ve got the Republican party more united more than it’s ever been, even in the run-up to the 2016 election. You have them saying, ‘This is unacceptable, it’s unfair. This man was elected, we’re not gonna let the nullification project overturn the 2016 election happen. Everybody’s pulling together,” he said.

Look at [Will] Hurd. He was probably the outlier on the committee. He’s basically said, ‘Hey, I’m not voting for impeachment.’ The Republicans are totally untied. On the Democrat side, you’ve already had a member of leadership, Jeff Van Drew– you’ve already had two, vote no. And now, you have the 31– a lot of them are saying ‘Hey, I’m neutral right now,'” Bannon added. (Video Below)

“So I think you’re gonna have a carve off of a half of dozen democrats who don’t vote for this, which then, turns it not into just a partisan vote, but a highly partisan vote. … That to me kicks off 2020 in a great way for the President,” the former White House chief strategist believes.