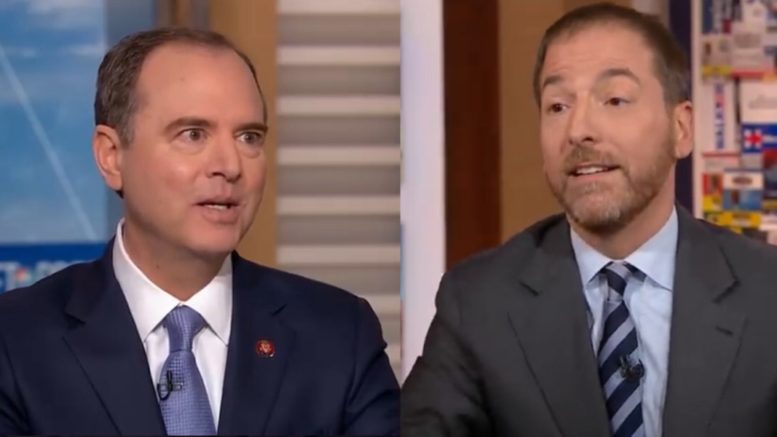 House Intelligence Committee Chairman, Adam Schiff (D-CA) spoke with host Chuck Todd Sunday on NBC’s “Meet The Press”, where he discussed the Democratic-led impeachment inquiry against President Donald Trump, claiming that his committee “has already accumulated quite overwhelming evidence” against the President.

Schiff further weighed in on whether the whistleblower will be called before his committee, and commented on the Senate wanting to call him as a witness to testify.

Asked by Chuck Todd if he can continue to investigate while compiling his report, and if it’s more for “show”, or does he have some evidence that more investigations are going to happen next week, Rep. Schiff said, “It’s certainly not for show.”

“There’s more work to be done, but at the same time we’ve already accumulated quite ‘overwhelming evidence’ that the President, once again, sought for interference in an election, conditioned official acts of a White House meeting that Ukraine desperately wanted, as well as 400 million dollars of bipartisan taxpayer funding to get these political investigations that he thought would help his re-election,” he alleged.

Schiff said that he views what he and the Democrats are doing as “urgent” and suggested that President Trump is “threatening for more interference”, adding, “At the same time, there are still other witnesses, other documents that we would like to obtain. But we’re not willing to go the months and months and months of rope-a-dope in the courts.”

Asked about the whistleblower after he pledged that the intelligence committee would, in fact, hear from the whistleblower, and if he is going to fulfill that pledge, Schiff replied, “We had a deep interest in having the whistleblower testify until two things happened. One, we were able to prove ‘everything’ in the whistleblower complaint with witnesses that had first-hand information. And second, the President and his allies effectively put that whistleblower’s life in danger. The President said the whistleblower and others should be treated as a ‘traitor or a spy’, and we ought to use the penalty we use to use for traitors and spies, and that’s the death penalty.” (Continued Below)

“So here’s the thing, Chuck,” Schiff continued. “We don’t need the whistleblower’s second-hand evidence anymore. It would only serve to endanger this person and to gratify the President’s desire for retribution, and that is not a good enough reason to bring in the whistleblower.”

Asked if he is ready if the Senate or Chief Justice Roberts calls him to testify, Schiff said, “If the Senate wants to call me as a witness, then they pretty much made the decision not to take this process seriously.”

“I’m not a fact witness,” he claimed. “I was a chairman of one of the committees doing an investigation. I’m not in the shoes of a special counsel. I don’t work for the Justice Department. All I relay is what the witnesses said in deposition and in the open hearings, and that’s no reason to call me as a witness.” (Video Below)

On Saturday, President Trump tweeted, “Adam Schiff will be compelled to testify should the Democrats decide, despite the fact that my presidential conversations were totally appropriate (perfect), to go forward with the Impeachment Hoax. Polls have now turned very strongly against Impeachment!”

Adam Schiff will be compelled to testify should the Democrats decide, despite the fact that my presidential conversations were totally appropriate (perfect), to go forward with the Impeachment Hoax. Polls have now turned very strongly against Impeachment!

Adam Schiff on testifying before the Senate:

"if the #Senate wants to call me as a witness, then they pretty much made the decision not to take this [#impeachment] process seriously."

"that's no reason to call me as a #witness"