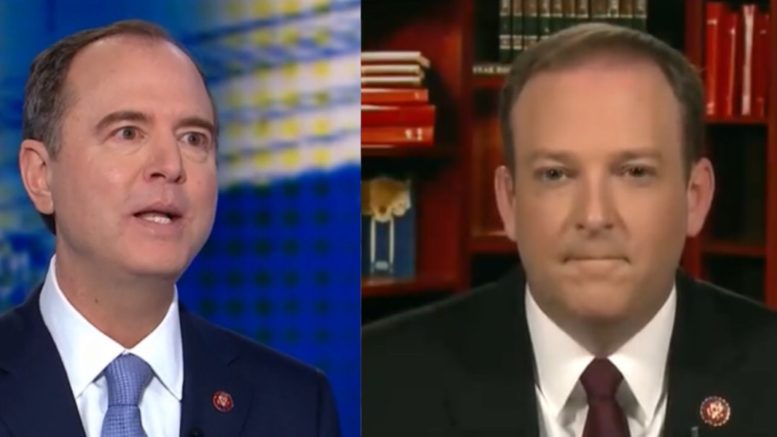 Congressman Lee Zeldin (R-NY) reacted on Monday after House Intelligence Chairman Adam Schiff (D-CA) claimed that he has an “ironclad” impeachment case against President Trump during an interview on CNN Sunday.

Schiff told host Jake Tapper during an interview on CNN’s “State of the Union”, that the case in terms of the “Ukraine misconduct is ironclad”, adding “so is the case of the President’s obstruction of the Congress.”

Rep. Schiff in his interview, however, wouldn’t say whether he has made a decision to vote to impeach President Trump, but added, “he wants to hear more from his constituents and his colleagues”.

Asked what is going on behind closed doors with Schiff and House Speaker Nancy Pelosi (D-CA), Congressman Lee Zeldin told host Bill Hemmer on Fox News’ “America’s Newsroom”, “What’s going on behind closed doors– it’s cakes, it’s beer, it’s a party. They are happy that they have this moment. Adam Schiff loved storytime, both during his opening statements and his closing statements when you were going through those open hearings.”

Zeldin sarcastically clarified: “[Schiff] always aspired to be a fiction writer. He wanted to be a screenwriter, and he now has this opportunity to write the world’s greatest parody.”

“And as far as him saying he’s not sure his mind is made up, give me a break– going to talk to his constituents. The constituents who knew as soon as the President of the United States was elected in November 16′, they started calling for him to impeached when he was getting sworn in. His constituents, some of these people had to go outside of their house and look up at the sky and start screaming for therapy,” Zeldin said. (Continued Below)

“Adam Schiff knows exactly what he wants here. He wants to remove the sitting President. He has people in his own conference, who have taken a position that they need to impeach the President, or they fear he will get re-elected, multiple members have said that,” the New York Congressman continued. “You have other members who have said the President needs to prove his innocence.”

“There’s been no due process throughout this. And when [Schiff] says he has an ‘ironclad’ case, I only think he has an ironclad imagination. I think that he has an ironclad amount of bad intentions here. And the rest of the story that comes out, when you look at what actually happened– when you sort through the second and third, fourth-hand hearsay, you just get to the facts of what Ukraine knew when, and what they didn’t have to deliver in order to get the aid,” he explained. [Emphasized].

“The President is in the clear and he did nothing you could possibly impeach him for,” Rep. Zeldin insisted. (Video Below)

Rep. Lee Zeldin also tweeted on Monday, “Schiff definitely doesn’t have an ‘ironclad’ impeachment case as he is desperately trying to suggest. He surely has himself though an active, “ironclad” imagination and a boatload of bad intentions.”

Schiff definitely doesn’t have an “ironclad” impeachment case as he is desperately trying to suggest. He surely has himself though an active, “ironclad” imagination and a boatload of bad intentions. pic.twitter.com/aypeoRXuXN

(Related: Schiff Tells Tapper He Has “Nothing To Testify About” When Pressed On Possibly Being Called As A Witness)