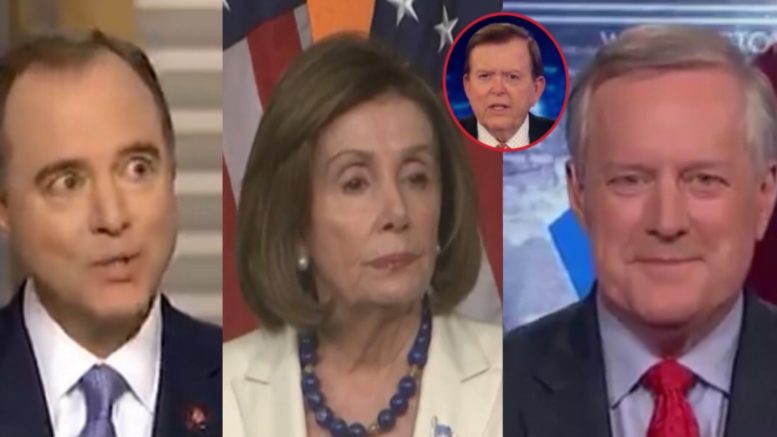 This comes as polls are dropping for impeachment and some Democrats have voiced their concern against impeachment.

“The American people are very smart. … People from across all America, really are gonna sit down at their Thanksgiving table this week, and they’re gonna say, ‘Am I better off? Did the President actually fulfill his promises? And do we see this for what it really is?’ Which is a partisan, political operation designed to take down the President of the United States.– And ultimately, they’re seeing there’s no facts to base this,” Rep. Mark Meadows explained.

Meadows pointed that when anyone spoke to the President, they got a very “consistent message”, in which the Commander in Chief said, “He didn’t want anything”, adding that Trump “didn’t get anything from Ukraine. And yet, we’re supposed to impeach a President that’s been delivering… time after time.”

Lou Dobbs praised Meadows and other Republican leaders who have stood shoulder to shoulder, untied and fighting for the President. “I think Adam Schiff and Nancy Pelosi are among those who are just stunned at what has happened because of your unity and your forceful defense of the President,” Dobbs expressed.

“Well, it’s about time is all I can say. So many times as you know, the GOP as not necessarily been unified in standing behind this President,” the North Carolina Congressman said. “But let me tell you what we’re seeing … A President who is being falsely accused each and every day, but this is not the first time.” (Continued Below)

“We saw it on the Russia hoax, we’ve seen it over and over again. Everything that the President does, the Democrats are gonna push back and say, ‘Wait just a minute. We can’t have this, because you know what? We might lose in 2020.’ Well, I’m here to tell you tonight, not only are they going to lose in 2020, but this President is gonna continue to deliver over and over again, because that’s his promise to the American people, and he’s dead serious about doing that,” Rep. Meadows explained.

Dobbs noted that Speaker Pelosi and the Democratic Congress and the Senate, have no initiative for the American people. “This has been a constant drumbeat of impeach, impeach, impeach– for what? It’s just astonishing because of the closed feedback loop that national leftwing media and the puppets of the Democratic party refuse to bring critical judgment to the annuity, the hypocrisy, and the pitiful lack of performance on their part for the American people,” Dobbs vented.

“You’re exactly right,” Meadows agreed. “Chairman Schiff said, ‘He could tell the Republicans wouldn’t be serious about it’. Let me tell you who’s not serious: chairman Schiff and his Democrat colleagues, [who] continue to get down in the skiff in that bunker in the Capitol. They would ask leading questions, they would take depositions, but they’re writing the report tonight. They’re actually writing the report on the impeachment of the President, and they haven’t even released all of the depositions. In fact, they haven’t released a couple of the depositions that would be to the President’s benefit. So, who’s not serious? I tell you, my Democratic colleagues are not serious.” (Continued Below)

Rep. Meadows along with other Republicans wrote a letter to House Oversight Committee Chairwoman Carolyn Moloney (D-NY), calling on her and the committee Democrats to abandon their partisan impeachment inquiry and focus on bipartisan committee priorities. (See letter below)

“[We] sent the letter saying let’s get serious about the things that matter most to the American people. Let’s talk about how we fight back on opioid addiction and the abuses there. Let’s make sure that we do proper oversight to make sure that our roads and bridges and prescription drug prices are both addressed,” Meadows recommended.

The North Carolina congressman concluded: “Here’s what I do see happening: they’re gonna file a report with Judiciary, the week after we get back from Thanksgiving. … The Democrats in the Judiciary are gonna go ‘Oh my goodness! We’ve never seen anything this bad.’ And they’re gonna hold a vote and try to put forth and change the polls and make sure the American people agree with them. It’s not gonna happen. You know, this dog isn’t hunting. And I can tell you at the same time, what we’re going to start to see is more and more evidence come out in support of the President, not against him.” (Video Below)

The official letter from GOP Oversight to Rep. Maloney:

(Related: Schiff Tells Tapper He Has “Nothing To Testify About” When Pressed On Possibly Being Called As A Witness)