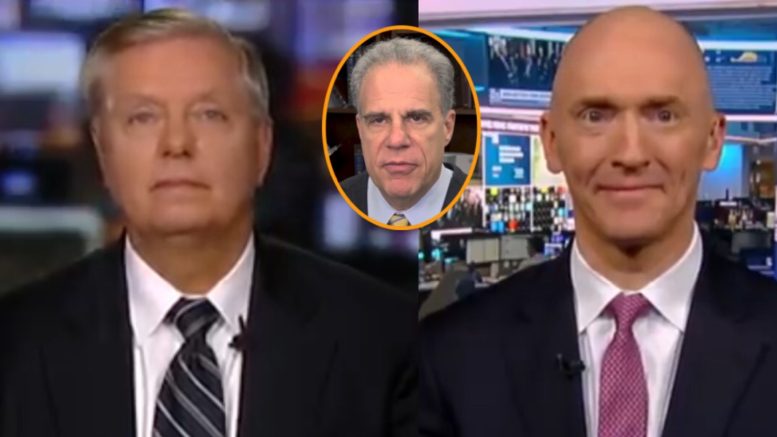 Former foreign-policy adviser to Donald Trump during his 2016 presidential election campaign, Carter Page, was the target of a Foreign Intelligence Surveillance Act warrant under the Obama administration.

Amid the release of Department of Justice Inspector General Michael Horowitz’s report on alleged government surveillance abuses, and the hearing scheduled for the DOJ’s watchdog to testify December 11 in the Senate, Carter Page sent a letter to Senator Lindsey Graham (R-SC) demanding that he be allowed to participate in the IG’s hearing.

Carter Page said last week that he is in talks with the Senate Judiciary Committee, but said he has not received a “final answer” from the panel and noted he would like to “have a say” at the December 11 hearing.

He also filed a lawsuit with the U.S. District Court for D.C. last month, accusing the Justice Department of Privacy Act violations and demanding an opportunity to review the FISA report before it is released to the public.

Page claimed he has not been given a chance to provide any input for Inspector General Michael Horowitz’s forthcoming report and is putting together “a very serious battle plan.” He told Fox News’ Sean Hannity last week: “I’m thinking of ways of fighting back, potentially even a court injunction.”

On Wednesday, Page sent a letter to Senate Judiciary Chairman Lindsey Graham requesting his admission to participate in the hearing scheduled with the Inspector General, saying that he has been smeared without being able to defend himself. (Continued Below)

Carter Page pointed to Democrats’ smear against Justice Brett Kavanaugh’s confirmation hearings last year and said that if he can’t participate to defend himself, it’s would equate to Christine Blasey Ford only being allowed to tell her allegations, but the accused subject is blocked from the proceedings.

Page requested that Senator Graham let him know by December 2 if he and the Senate Judiciary will allow him to participate in the hearing.

However, he concluded by saying if Graham doesn’t let him participate, he “will be left with no other choice and will plan to file a restraining order injunction motion next week to address the damages caused by the OIG report’s continued mismanagement”.  (Continued Below)

Carter Page posted his letter on Twitter and wrote, “The long road to freedom and justice“.

The long road to freedom and justice –

My letter to @LindseyGrahamSC and @senjudiciary today: pic.twitter.com/yVYRGX4Saj

We leave you with Carter Page in an interview with Fox Business host Maria Bartiromo where he discussed the reports of an FBI employee altering documents in the 2016 Russia probe, the false narrative being pushed by Democrats, the FBI’s surveillance of him for information on the Trump campaign, and what might come out in the IG report on the Russia probe.

(Related: Sara Carter Previews What She Thinks Will Be The ‘Most Damaging’ Info To Be Declassified)