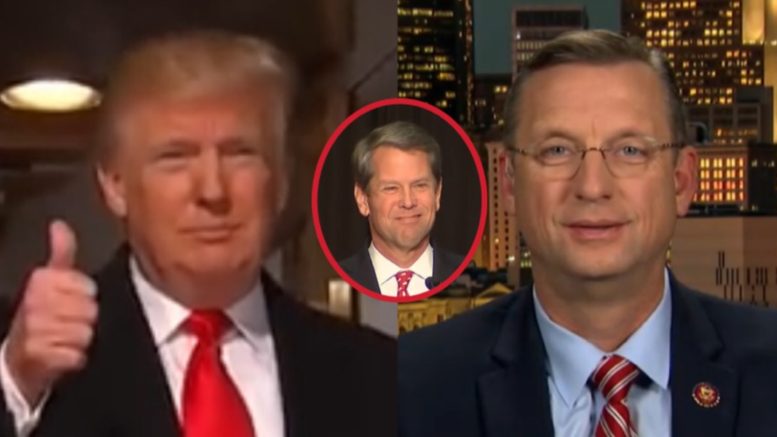 Last week, Congressman Doug Collins (R-GA) told the Atlanta Journal-Constitution that he was “strongly” considering a run for Senate even if he’s not tapped by Governor Brian Kemp (R-GA).

President Trump reportedly pressed Kemp to appoint Collins to an open Senate seat to fill Senator Johnny Isakson’s (R-GA) seat. Isakson is stepping down at the year’s end due to health concerns, and the race to fill the remaining two years of Isakson’s term is a wide-open special election, as per the Atlanta Journal.

“In recent days and weeks, I’ve heard from more and more Georgians encouraging me to pursue statewide service,” Rep. Doug Collins told the Atlanta Journal-Constitution. “Those Georgians deserve to have me consider their voices – so I am, strongly.”

Collins added, “As I focus on defending the president against partisan impeachment attacks, I recognize Georgia needs someone with experience serving at home and making them heard in Washington.”

Tuesday during Fox News’ “Hannity,” Collins also stated that he would accept an appointment to Georgia’s seat in the United States Senate if offered.

Host Sean Hannity publicly endorsed Rep. Collins for the Senate seat and said: “I’d like the governor to appoint you because you have turned into a rockstar– a Republican with a backbone. You went out there and you released transcripts that no other congressman would release. That is the type of leadership that we need in the Senate. I would urge the governor to appoint you. I think you’d do a great job. I hope that happens. Would you take it if offered?” (Continued Below)

“We can offer great for Georgia, but also be there for this President– continue to fight back [at] this Democratic farce show that’s been all year. We believe we’re well suited for that and I appreciate your endorsement,” he added.

Hannity expressed, “You have been a rising star. There have been few voices that have emerged in this madness. You’re definitely one of them and I applaud your courage.” (Video Below)

From The Atlanta Journal-Constitution

A four-term lawmaker, Collins has become a household name to supporters of Trump because of his lead role on the House Judiciary Committee and his outspoken opposition to Democratic-led impeachment proceedings.

His district, which stretches across the mountains of North Georgia, is one of the most conservative on the Eastern Seaboard and is home to the state’s largest trove of Republican primary voters.

Collins’ supporters are quick to tout his alliance with Trump. (Continued Below)

Donald Trump Jr. recently headlined a high-dollar fundraiser for Collins, calling him the type of “fighter” Republicans need in the Senate. On Wednesday, the younger Trump expressed his support for Collins on Twitter.

U.S. Rep. Matt Gaetz of Florida, one of the president’s top congressional allies, sent a Twitter message saying it’s “beyond dispute” that Trump’s support led to Kemp’s win in the GOP primary on his way to victory in last year’s race for governor. He pressed Kemp to “do what you *know directly* is the right thing” and appoint Collins.

.@BrianKempGA – Its beyond dispute that u won the primary due to @realDonaldTrump.

Do what you *know directly* is the right thing & appoint @RepDougCollins to the Senate.

Doug can be a needed champ for POTUS in the Senate Day 1.

No time for on the job impeachment training.

.@RepDougCollins is a fighter and exactly the kind of person Republicans should want in the senate. We need someone who gets it, not someone who will have to learn on the job. https://t.co/TZMCIttBBO

(Related: Rep. Collins: Schiff Is A “Runaway Chairman Who Has No idea What He Is Doing When It Comes To Carrying Out A Fair & Honest Procedure”)