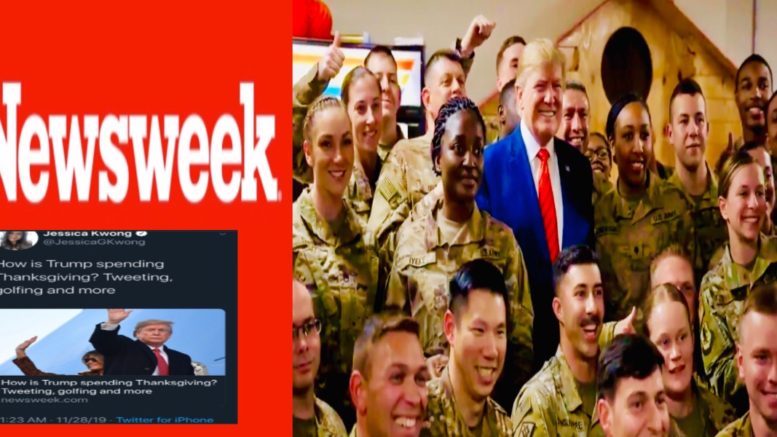 The Commander in Chief made an unannounced, surprise visit to Afghanistan on Thanksgiving Day to meet with U.S. troops to show America’s appreciation and gratitude. He arrived shortly after 8:30 p.m. local time and spent more than two-and-a-half hours on the ground. Reporters were under strict instructions to keep the trip a secret to ensure the President’s safety.

However, a “political reporter” at Newsweek, Jessica Kwong, apparently didn’t get the memo as she wrote an article titled: How is Trump spending Thanksgiving? Tweeting, golfing and more

Jessica Kwong wrote, “President Donald Trump has been spending his Thanksgiving holidays at his Mar-a-Lago resort in Palm Beach, Florida, which he calls the ‘winter White House,’ and this year is no exception.”

“As with any other day of the year, Trump will probably be tweeting, or expressing his opinions in another way,” Kwong also wrote.

(Related: Mark Levin: ‘You Can’t Find Dime’s Worth Of Difference Between The Media & The Democrat Party’)

As it has been widely reported, the President flew 13 hours from Florida to Bahram Airfield in Afghanistan, humbly served Thanksgiving dinner to the troops, took pictures and addressed the soldiers in a speech. (Continued Below)

Newsweek updated their article amid the news of the President’s visit to Afghanistan with an updated correction at the bottom of their article.

*Update, Jessica Kwong deleted her tweet with the article, along with updating the title of her article after receiving criticism and after she got blasted as being “fake news”. (Continued Below) 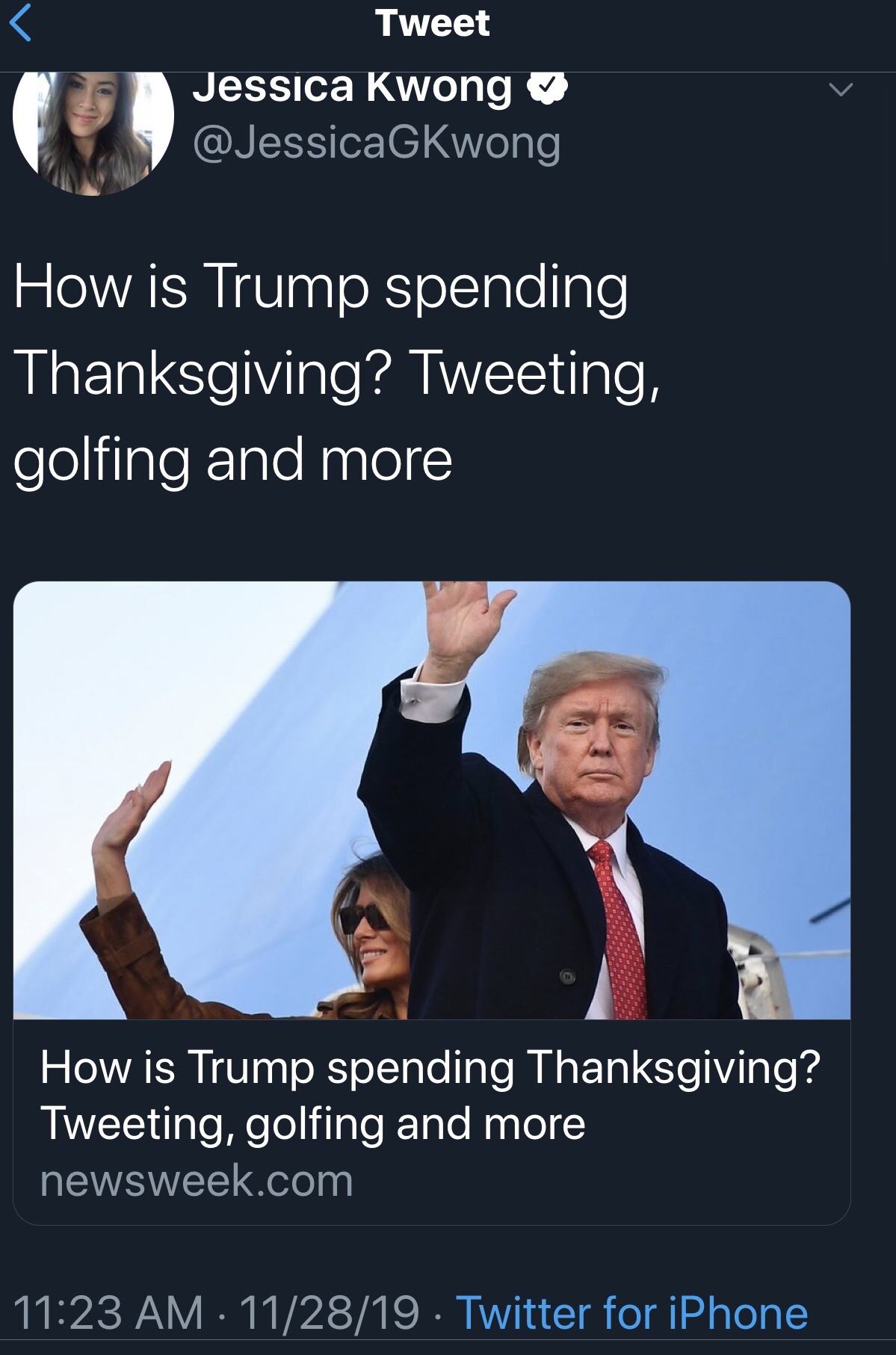 After much backlash, Kwong updated:

Trump headed to Afghanistan to surprise U.S. troops on Thanksgiving https://t.co/f7Xeqz1ZGQ Deleting this tweet because it was written before knowing about the president’s surprise visit to Afghanistan-an honest mistake. Story has already been updated, as shown in the screenshot. pic.twitter.com/g9CfPaV2kQ

Hi @Newsweek – we’re actually on our way back from Afghanistan right now. @realDonaldTrump served Thanksgiving dinner to members of the military & thanked them for their incredible service to our country. Standing by for you to delete this completely false tweet. https://t.co/trYHUNtgxf

The President spends his Thanksgiving with American troops deployed in Afghanistan, including serving them lunch. Meanwhile, over at the Fake News… https://t.co/rJSQ8u0vLP

He’s literally in Afghanistan with the troops. Delete this tweet and your article https://t.co/FAP4jvwaQW

Great example of fake news & biased, disgusting, Trump-hating media making fools of themselves. Actually, @realDonaldTrump was in Afghanistan serving food to US troops on Thanksgiving. Media was soiling their pants by making stuff up and looking worse than their usual stupid. https://t.co/LIufU45WH6

We leave you with a video clip of the “fake news” media:

This has to be the best video of Trump's Presidency. "The Fake Media Tried to stop us from going to the White House, but I'm President and they're not". #fakenews pic.twitter.com/yOrDiXYGU8

(Related: In His Opening Statement, Nunes Slams The Media’s Impeachment Coverage: “Puppets Of The Democratic Party”