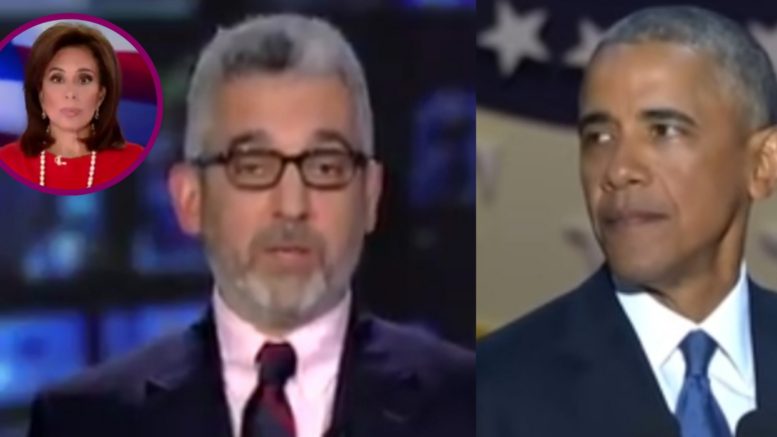 Investigative journalist Lee Smith appeared on Justice With Judge Jeanine where he discussed excerpts from his book “The Plot Against The President,” which details how officials in the Obama Administration were involved in one of the biggest “scandals” in American history to take down President Trump.

During his interview, Smith said there’s evidence in a couple of areas, “where the 44th President of the United States Barack Obama seems to be involved.”

“One of the most important times is when [Obama] ordered John Brennan, his CIA Director, to produce that community intelligence assessment, which said that Vladimir Putin was responsible for electing Trump,” Smith said.

Smith went on to say that he finds it “more than curious” that former President Obama is still living in Washington, which suggests he is “the de facto head of the Democratic party still.”

Related Article: Acosta Says There’s ‘No Evidence’ Obama Tried Influencing The 2016 Election, Bongino Fires Back: ‘Is This A Joke?’

“I believe the last President who remained in Washington was Woodrow Wilson, and this was after he had a stroke. He couldn’t move,” Smith said.

“So the fact that Barack Obama — that this is still his party and people talk about the radicalism and they talk about the anti-Trump operation. Sorry, but Barack Obama is right in the middle of this, as our all of his intelligence officials,” he declared. “From Johm Brennan to James Clapper, James Comey, Andrew McCabe — these are Obama appointees.” Video Below

Author of "The Plot against The President:The true story behind how Congressman Devin Nunes uncovered the biggest political scandal in U.S history" @LeeSmithDC joined me on "Justice" with more on why this is such a critical time in our country, take a look: pic.twitter.com/7q24tgLFt5