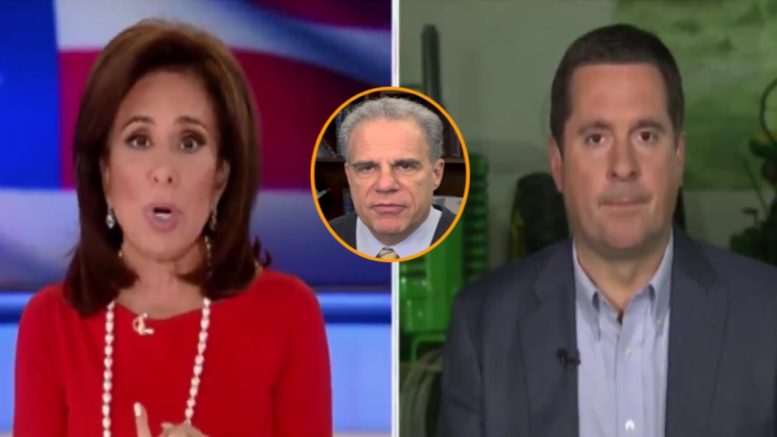 Ranking member of the House Intelligence Committee, Devin Nunes (R-CA), spoke with host Judge Jeanie Saturday where they discussed the upcoming Inspector General’s FISA report that is expected to be released on December 9. The report will detail findings on allegations of abuse in the FBI’s surveillance of Trump associates, including former Trump campaign aide Carter Page, during the 2016 election. The DOJ watchdog will also testify on December 11 in regards to his findings.

Former Trump campaign aide Carter Page is accusing the Department of Justice of “Orwellian overreach” in its efforts to delay responding to his lawsuit seeking early access to the long-awaited report on FBI surveillance during the 2016 campaign — days before the report is expected to be released, as reported by Fox News.

“On Monday, this Court confirmed that Article II authorities “do not have subjects, bound by loyalty or blood, whose destiny they are entitled to control,” Page said in a court filing. “But characteristic of the Defendant’s Orwellian overreach, DOJ has instead continued to exercise an even greater level of absolute control entailing life-threatening damages against the Plaintiff, stemming from the United States Government’s incessant violations of the Privacy Act of 1974 and other alleged criminal activity.”

Multiple news outlets, however, reported last week that Horowitz had found evidence that an FBI lawyer manipulated a key investigative document related to its surveillance of  Page. In its initial 2016 FISA warrant application, the FBI described Page as an “agent of a foreign power.”

Judge Jeanine explained that Carter Page has never had an opportunity to see the FISA report before it is publicly released and asked Rep. Devin Nunes, “People like Andrew McCabe, who was referred for criminal prosecution a year and a half ago, has been able to see it– edited or redacted or whatever they’re allowed to do. Why is Carter Page not allowed to see that report?”

“That’s why what you’re seeing out here in the news media, that’s leaking now, it’s the version that the dirty cops have, not probably what the real version is,” Rep. Nunes suggested. [Emphasized].

Asked about the FBI lawyer, Kevin Clinesmith, who allegedly manipulated a key investigative document related to its surveillance of Carter Page, Nunes said, “This guy is not just some little French guy. Number one, he’s not French. He’s the lead lawyer on the Clinton investigation and on the Trump investigation in the campaign. So, the idea that anyone would be calling him some low-level lawyer is idiotic.” (Video Below)

“I’m actually shocked,” Nunes expressed. “If he really did actually did change evidence– right? That’s what he’s being accused of in the papers. We have to wait to see if it’s true. If he doctored evidence that’s far worse that even using the Democrats dirty dossier and using fake news stories. Doctoring evidence? I mean, this guy better be strung up.”

Congressman @DevinNunes reacts to the latest in the battle with Democrats over the impeachment inquiry. Check this out. pic.twitter.com/rzVrucYZj2

(Related: Carter Page Sends A Letter To Senator Graham Demanding He Be Allowed To Participate In Demember’s IG Hearing)